Review: Under the never sky by Veronica Rossi

February 13, 2012
Under the Never Sky by Veronica Rossi
Published by Atom 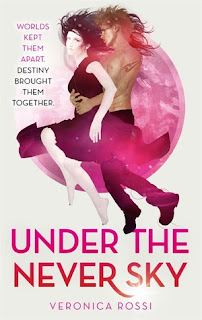 DESTINY BROUGHT THEM TOGETHER.

Aria has lived her whole life in the protected dome of Reverie. Her entire world confined to its spaces, she's never thought to dream of what lies beyond its doors. So when her mother goes missing, Aria knows her chances of surviving in the outer wasteland long enough to find her are slim.

Then Aria meets an outsider named Perry. He's searching for someone too. He's also wild - a savage - but might be her best hope at staying alive.

If they can survive, they are each other's best hope for finding answers


***
I have been waiting for this book for what seems like an age. The ideas behind it sounded awesome and I literally couldn't wait to get stuck in.

I must admit up until about 100 pages in I was fully prepared to give up on this book. I was bored and I was struggling to keep on top of what was happening because I found the story telling clunky, the ideas hard to get my head around and the voices between the split narrative not distinct enough. That said once I got a bit further I started to get into it a bit more and by the end I had enjoyed what I had read so while I'm not convinced this was a great standalone novel I have high hopes the series as a whole could be good.

In the end the thing that kept me reading was the relationship between the two main characters Aria and Perry. After a while of being together they both soften towards one another and start working as a team. It is then through this working together you start to see their different worlds through the other one's eyes and it starts to make sense. You also start to root for them as a couple and that makes the story much more interesting to follow. Once you get into that you start to understand a bit more of the whole world set up and start to unravel all the little details that build up the world they are in and understand why things as they are.

All in all not my favourite book of the year but a series I hope will be awesome.

Ailsa said…
I think I'm going to try to read some more reviews before I decide whether to give this one a go or not. Some things about it sound good, others, I'm just not sure about.

Mel said…
I have to agree that the relationship between Aria and Perry really made this book for me. I liked thta there was no insta-love and I felt they were both realistic about their future together. Lots of potential for this series I agree! :)
14 February 2012 at 22:15

The Insouciant Sophisticate said…
I had similar thoughts to this too-the beginning was confusing and didn't immediately grab me. But the relationship between Aria and Perry was a keeper and will draw me back to the second book.
18 February 2012 at 05:23

Raimy from Readaraptor Hatchling said…
interesting... I have heard other people say its a bit tough to get in to too but I still really want to give it a go. maybe I'll just wait for a bit though!
18 February 2012 at 15:27