Books are a huge part of who I am today.
I owe them a lot.
My friends from Riot Communications, who run an arts publicity business, were making a video for a World Book Day project. They asked if they could feature me in their video and show how books offered me opportunities and shaped me. I was incredibly flattered to be asked and said of course because books do open doors and it is important to get that message out there. This is the super video they came up with: http://vimeo.com/thecurvedhouse/riot.
So, books are super important to me, and I have very kindly been invited to talk a bit about what I have on my bookshelf. This is kind of awesome but I am moving in March so a lot of my books are packed up. Still, I have a few books out on the shelf and so I’ll talk through them. 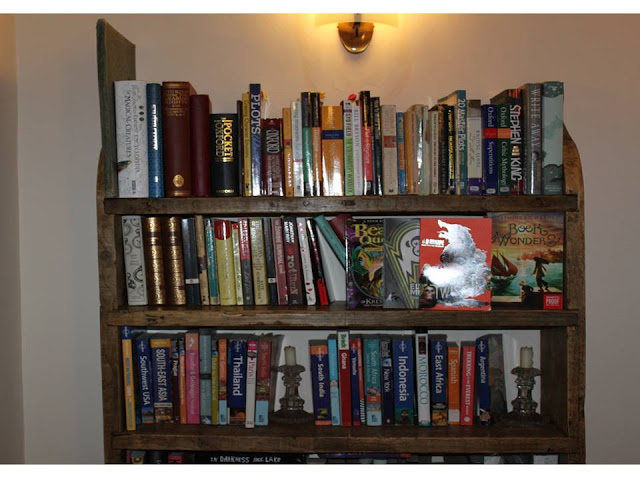 My first shelf is what I call my writing shelf. 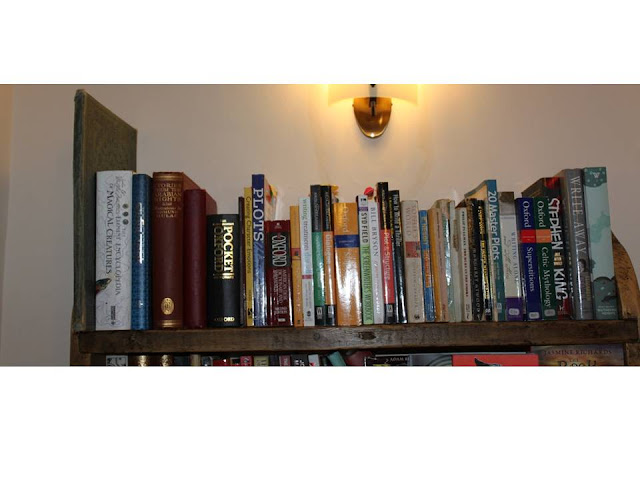 It has practical things on it like a dictionary and atlas. I also have a big encyclopaedia of mythical beasts which I found super helpful when writing Oliver Twisted as the world that Oliver lives in is populated by strange and terrible creatures.
I have three volumes of Arabian Nights, see here to find out why! I have books about plot building, dialogue and character crafting. These are especially helpful if you are feeling blocked and need a creative jumpstart or food for thought.
I also have a book here called The Child that Books Built, which is just a beautiful piece of writing. I urge anyone who has a love of children’s books to read this.
I also have a collection of books from my childhood. These are a selection of my favourite books – a kind of paperback built talisman that is there to inspire me when I’m feeling stressed or stuck.
These books are:
Sophie’s World by Jostein Gaarder
Matilda by Roald Dahl
Five Children and It E Nesbit
Goodnight Mr Tom Michelle Magorian
Ruby in the Smoke Phillip Pullman
Children of the Dust Louise Lawrence
I have a book by Stephen King up here as well because I think he rocks and is a master storyteller! My lovely cloth bound edition of Wuthering Heights is there because I love this book and this format. It also reminds me that books need to be beautiful and well-crafted inside and out. 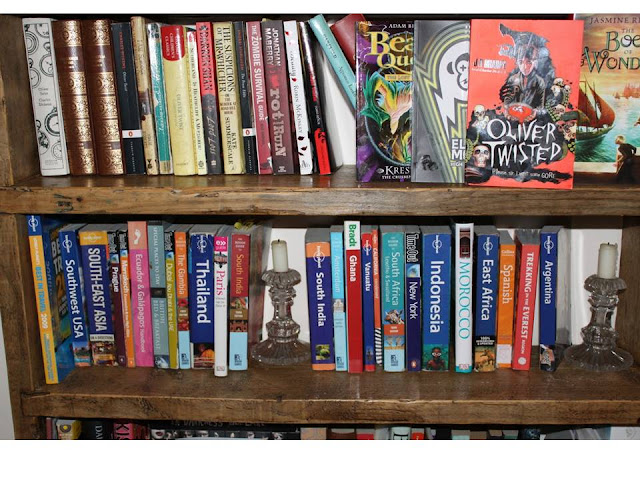 Right, now for my second and third shelves!
The second shelf contains some of the books I used to research Oliver Twisted. So we have a collection of Dickens’s novels, retellings, horror books and historical fiction.
One little gem here is Apprentices London by Leon Garfield. I found this book in a second hand shop in Hay and found it very helpful when it came to immersing myself in a Victorian world. Leon Garfield, who is a Carnegie winner, was a great fan of Dickens and that is clear on every page of this book.  The Suspicions of Mr Whicher was also very atmospheric and great research for the time period that Oliver Twisted is set in.
You’ll also see that I have The Zombie Survival Guide. This was the other side of my research. If I was going to have a cast of creatures who had escaped from another realm and invaded Victorian Britain, then I wanted to do as much reading about them as I could before adding my own flourishes, inventions and new mythologies. I loved the ideas of zombies, and wanted them in the book, but the word ‘zombie’ sounded far too modern for Oliver Twisted and so I created the name woe-begottens.
On the other side of the shelf, I have books that I have actually written!  So Oliver Twisted is there in all of its read and black glory, as is The Book of Wonders which is my fantasy middle grade novel that is being published by Harper Collins in the US and came out three weeks ago. There is also a sampler of writing from Egmont’s new imprint Electric Monkey. And a Beast Quest that I worked on.
The third shelf is dedicated to my other love - travelling. The books here are all places I’ve been to or that I’m planning to go to apart from the Trekking Everest book, which belongs to my husband! I first went backpacking in 2002 and I caught the travel bug and never wanted to get a cure.
Thanks for having me as a guest post today!

Mel said…
I love the mixture of 'working' books and old favourites on your shelves! I have a little small book case where I keep my non-fiction & Travel books but I might start to mix them now as it looks really interesting! :)
11 February 2012 at 09:06