Finding somewhere to write in our house was always going to be a problem; there were just so many of us in the family taking up the available space, but when my eldest went to university, the opportunity presented itself, in the form of her little room under the eaves at the very top of the many stairs. Here I have my desk and my very own bookshelf. Many of the books are for reference and research (like The Malleus Maleficarum (Hammer of the Witches) an infamous treaty on witches written in the 1480s – gripping stuff) but others are very special books that I’ve carried around with me from bedsit to flat to house to (borrowed) room since I was a child. They are very precious and I like to have them near me when I’m working. You can tell I have read them over and over again because the bindings are falling apart. 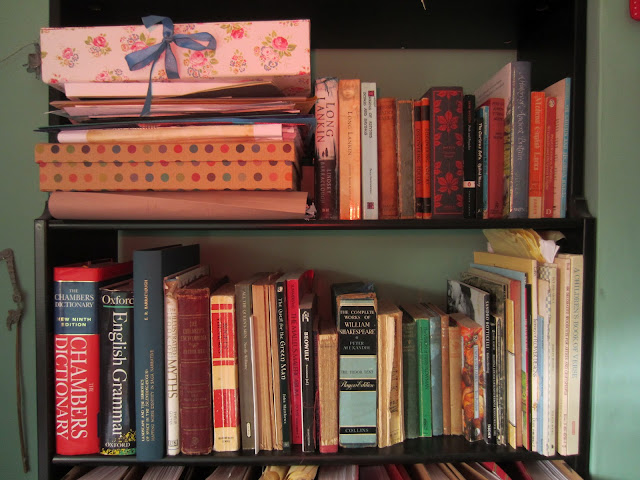 Mel said…
I love your story about the Curious Sofa - really made me giggle, although it seems like a fairly innocent title to me!
It's always great to hold onto your favourite books - my copy of Watership Down is very ragged now but I still read it and take with me everytime I move!
25 February 2012 at 08:56

Lynn said…
That was an excellent piece. I enjoyed taking a look at your bookshelf - particularly some of the books which I've read - Jane Eyre is a particular favourite.
I hadnt heard the Long Lankin rhyme - it gave me the chills - that book was so creepy.
Thanks again
Lynn :D
27 February 2012 at 22:58