Review: Every other day by Jennifer Lynn Barnes

February 17, 2012
Every Other Day by Jennifer Lynn Barnes
Published by Quercus 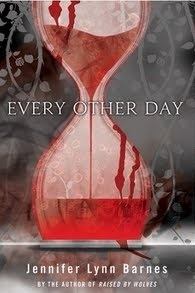 Every other day, Kali D'Angelo is a normal sixteen-year-old girl. She goes to public high school. She attends pep rallies. She's human.

And then every day in between . . .She's something else entirely.

Though she still looks like herself, every twenty-four hours predatory instincts take over and Kali becomes a feared demon-hunter with the undeniable urge to hunt, trap, and kill zombies, hellhounds, and other supernatural creatures. Kali has no idea why she is the way she is, but she gives in to instinct anyway. Even though the government considers it environmental terrorism.

When Kali notices a mark on the lower back of a popular girl at school, she knows instantly that the girl is marked for death by one of these creatures. Kali has twenty-four hours to save her and, unfortunately, she'll have to do it as a human. With the help of a few new friends, Kali takes a risk that her human body might not survive. . .and learns the secrets of her mysterious condition in the process.


I must say while I was looking forward to this one I don't think it fully lived up to my expectations in the end.

I did like Kali the main character. I though she was funny and had something about her which made me want to know more about her.

The scenes were action packed with a lot going on which kept me going through the book but I don't think I was drawn in all that much to care what happened to some of the characters and I sometimes felt that just too much was going on.

I liked that the focus in this book was on the girls and not on a romantic lead who comes in a sweeps them off their feet.

I did like the big twist of the story and found it really interesting although I must admit I did guess something like it might happen (I think I read too much of this type of book and it was quite cliche).

While I hate to run the risk of sounding nasty I just felt that too much of this story had been told before and none of the characters or events really stuck in my mind all that much to the point where I'm sat here now writing my review less than 24 hours after reading it and struggling to remember what happened. Maybe the problem is me and the sheer volume of YA I read??

Krazzyme(Young Readers) said…
It's not just you! I still haven't finished this one!!

The Insouciant Sophisticate said…
I thought this one was pretty good and quite different from the usual YA paranormal with its lack of focus on romance. But I'm mostly a reader of contemporary so I'm not as familiar with the twists and turns of paranormal.
18 February 2012 at 05:16

Raimy from Readaraptor Hatchling said…
Ive seen many mixed feelings about this one... I have it on my tbr but Im not rushing to read it!
18 February 2012 at 15:25