February 06, 2012
Someone Else's Life by Katie Dale
Published by Simon and Schuster 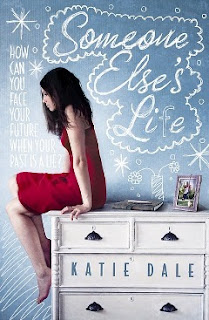 When seventeen-year-old Rosie’s mother, Trudie, dies from Huntington’s Disease, her pain is intensified by the knowledge that she has a fifty-per-cent chance of inheriting the crippling disease herself. Only when she tells her mum’s best friend, ‘Aunt Sarah’ that she is going to test for the disease does Sarah, a midwife, reveal that Trudie was not her biological mother after all... Devastated, Rosie decides to trace her real mother, hitching along on her ex-boyfriend’s GAP year to follow her to Los Angeles. But all does not go to plan, and as Rosie discovers yet more of her family's deeply-buried secrets and lies, she is left with an agonising decision of her own - one which will be the most heart-breaking and far-reaching of all...


***
Someone Else's Life was described to me as a Jodi Picoult novel for Young Adults and that description is totally spot on. It has the all the same qualities of a Jodi novel and was a brilliantly awesome read.

I loved several things about this book

I loved Rosie as a main character and really warmed to her quickly. She has dealt with so much in her recent past and as the differing revelations are unveiled the emotional stresses put on her start piling up thick and fast. Seeing how she deals with them was absolutely fascinating. It wasn't just Rosie, all the different characters you meet have their different personalities and quirks which I loved.

This book was brilliant at pulling out all the stops when it came to the twists and turns in the plots. There were several times when I was stunned by the latest revelation or by what had just happened. This meant I just had to keep reading to find out what was going to happen next and therefore meant I finished it in one sitting in a matter of hours.

Katie's book was wonderfully raw and emotional throughout which I think was the real strength of the book and was the main reason why you were drawn completely into the world of the characters.

All in all a brilliant book which kept me hooked from the first to the very last page. I am so excited to see what Katie writes next.
READ IT FOR THE BRITISH BOOKS CHALLENGE 2012

Cait said…
I enjoyed this one as well, I totally agree it was really engrossing and you did just keep reading to find out what was going to happen!