February 27, 2012
Goliath by Scott Westerfeld
Published by Simon and Schuster 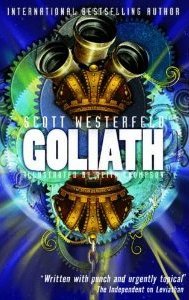 Alek and Deryn are on the last leg of their round-the-world quest to end World War I, reclaim Alek’s throne as prince of Austria, and finally fall in love. The first two objectives are complicated by the fact that their ship, the Leviathan, continues to detour farther away from the heart of the war (and crown). And the love thing would be a lot easier if Alek knew Deryn was a girl. (She has to pose as a boy in order to serve in the British Air Service.) And if they weren’t technically enemies.

The tension thickens as the Leviathan steams toward New York City with a homicidal lunatic on board: secrets suddenly unravel, characters reappear, and nothing is at it seems in this thunderous conclusion to Scott Westerfeld’s brilliant trilogy

This review is going to be short and sweet as I don't want to spoil the series for anyone.

Goliath is the last in a series of books set in a steampunk world and follows the story of the First World War in an alternate setting.

I loved this series and this final book for several reasons as follows:

The world setting excites the historian in me. Whilst reading it I am often finding myself wanting to know more about the actual events the story is based on and stopping to go off and do a bit of research. I also loved the steampunk aspects and really enjoyed seeing the different between the world of the Darwinsts and that of the Clankers

The relationship between the two main characters is what really does it for me. I loved seeing their friendship develop over the series as they are both so similiar but also world apart due to their background. I equally loved them both in their own right and have enjoyed following both their stories and loved seeing where they finally ended up.

Despite being a beast of a book size wise I found myself powering through it quickly as  the storylines were engaging and fast paced leaving me wanting to read more and more.

A fantastic series which I'd highly recommend.

Annette Mills said…
Absolutely loved this series. Highly commended. I wish I could read it again for the first time!
27 February 2012 at 01:16

Unknown said…
I can't believe I still haven't read a Scott Westerfeld book yet. All I keep hearing about is how awesome he is.
2 March 2012 at 09:51

Amy Aed said…
I really need to contact someone from the British Book Challenge. Please could you comment on my BBC Post (http://akwarddonkey.blogspot.com/2012/02/overflowing-library-british-book.html) giving me an email or something. I have a lot of questions but no one to ask them to...
4 March 2012 at 09:23

The Insouciant Sophisticate said…
I really love the historical setting too and with the steampunk elements, it makes it even more fun!

I actually didn't like the ending of this series (wasn't rooting for that relationship outcome) but I still think Deryn and Alek are great characters!
6 March 2012 at 04:06