February 18, 2011
Mortlock by Jon Mayhew
Published by Bloomsbury
Challenge: BBC
Source Review Copy (thanks Bloombury for sending this to me for review) 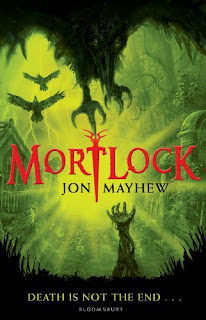 The sister is a knife-thrower in a magician's stage act, the brother an undertaker's assistant. Neither orphan knows of the other's existence. Until, that is, three terrible aunts descend on the girl's house and imprison her guardian, the Great Cardamom. His dying act is to pass the girl a note with clues to the secret he carries to his grave.


***
This is one creepy book and while it was good it really wasn't for me as it was a bit too creepy and gory.

The novel is set in Victorian London and follows the story of orphaned twins Josie and Alfie as they try to uncover the mystery of a secret connected to their past, that has been passed on to them in in a note by Josie's dying guardian.

The story starts off at break neck pace and keeps it up throughout with engaging twists and turns. Despite being totally freaked out at some of the passages (there are some truly horrible descriptions of evil birds attacking people) I had to keep reading to find out what happened. The most disturbing bits for me had to be when anyone was stuck in a house with the aunts and the section at the circus. It is quite a feat to freak me out but this book did it.

My historical head loved the setting of Victorian London with the descriptions of East End living and the truly horrible conditions people endured.

Definitely not one for younger readers as there is a lot of gore throughout The story is very macabre throughout and despite me not being keen on some of the content it is actually written very well. . The final ending was good (albeit still freakishly creepy) as it brought everything together well (I do like a nice ending which answers everything) and summed up and finished the story nicely.

serendipity_viv said…
I adore creepy and gory! Good job I bought this one yesterday wasn't it!
18 February 2011 at 12:01

Unknown said…
I think I would feel the same about this as you. Being a complete wimp. I am looking forward to rying Mayhew's next book The Demon Collector though. I think that might be more my kind of thing.
20 February 2011 at 11:41

Jesse Owen (Reading to Life) said…
Ooh! This one sounds good - I haven't tried a gory book yet, might be a good one to start with.

Michelle Fluttering Butterflies said…
I have this one to read o n my pile, and I'm really looking forward to it. I think after love month, I deserve a bit of creepy and gory! In fact, I crave it :)
21 February 2011 at 09:05