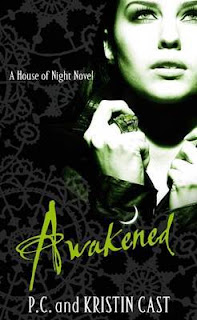 At the start of Awakened, the pulse-pounding eighth installment of the bestselling House of Night series, Zoey has returned, mostly whole, from the Otherworld to her rightful place as High Priestess at the House of Night. Her friends are just glad to have her back, but after losing her human consort, Heath, will Zoey—or her relationship with her super- hot Warrior, Stark—ever be the same? Stevie Rae is drawn even closer to Rephaim, the Raven Mocker with whom she shares a mysterious and powerful Imprint, but he is a dangerous secret that isolates her from her school, her red fledglings, and even her best friends. When the dark threat of Neferet—who is coming closer and closer to achieving her twisted goal of immortality—and Kalona returns, what will it take to keep the House of Night from being lost forever, and what will one desperate girl do to keep her heart from being irreparably broken?


***
I have to say I was reluctant to continue on with this series and was so close to giving it up but actually I thought instalment was a much stronger offering than the previous two books. Yes there were still the cringingly bad pop culture and stereotypical reference which annoy me but all in all it wasn't bad.

Zoey is back and things are building up for a kiss ass show down between her and Neferet. I liked seeing Zoey and Stark together and their relationship really came together for me in this book. Despite not being a huge fan of him initially I think they work quite well together and I hope things go well for them.

I've said before the references to the gay couple in this series annoy me somewhat. I don't really care if a character is gay or not but it seems like the Casts have written in Damien and Jack just so they can have a gay couple as a novelty (and a very camp one at that - FYI not all gay men are camp). The early references in this book to them did make me think they were going to do this again (especially when linked to Glee and Jack signing deifying Gravity - I just cringed at that point) but actually once they got over that bit the Jack/Damien storyline was the bit that touched me most in this book as you finally got to see their relationship for what it was - two people in love rather than a novelty written in to alert the world that the Casts are OK with all thing camp and gay.

I don't want to tell you too much about happens in the story as I don't want to give anything away but I will say that the overall story line seems to have moved on a lot and the main characters have made some life altering decisions. There were several story lines set up at the end of the book that if played out well have the potential to be awesome surrounding, Zoey and her choice about the House of Night, Heath's soul, Stevie Rae and Zoey's family. I hope they are done well.

BookGeek said…
While I have not ready any of this series, I wanted to comment on the awesome green text for the title.

fantasylover12001 said…
I want to like this series, I really do. But it just irritates me too much to like it. All the things you mentioned are right, plus Zoey's constant snarking and judgmental/hypocritical attitude just made me give up after book 3.
2 February 2011 at 00:26