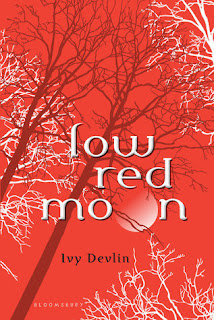 The only thing Avery Hood can remember about the night her parents died is that she saw silver—deadly silver, moving inhumanly fast. As much as she wants to remember who killed them, she can't, and there's nothing left to do but try to piece her life back together. Then Avery meets the new boy in school—Ben, mysterious and beautiful, with whom she feels a connection like nothing she's ever experienced. When Ben reveals he's a werewolf, Avery still trusts him—at first. Then she sees that sometimes his eyes flash inhuman silver. And she learns that she's not the only one who can't remember the night her parents died.Part murder mystery, part grief narrative, and part heart-stopping, headlong romance, Low Red Moon is a must-read for teen paranormal fans. As breathless as Twilight and as spooky as Shiver, this is a book to be devoured in one sitting—by an acclaimed YA author making her paranormal debut under the pseudonym Ivy Devlin.


***
This book was definitely one with a "first in a series" feel to it.

Low red moon follows the story of Avery a young girl who has recently lost her parents in a horrific event which she still can;t quite remember happening despite being found at the scene covered in blood. As the story involves she meets a mysterious (and good looking) boy who seems to know more than he is letting on about Avery's parents death and the story of what happened and why unfolds.

I did Like Avery. I thought she was really sweet and a lovely character who you really felt for. I loved watching the relationship between her and her grandmother (who up until now was a stranger to her) develop and grown as they started to build up an understanding of each other. What I didn't get however was the attraction between Avery and Ben - yes he is apparently hot and mysterious but they barely say two words before they start crawling all over each other. I would have liked to have seen a bit more build up of their relationship.

The thing that tipped it in the end for me with this book was the final part in which the mystery around Avery's parents death is revealed. I didn't see it coming and thought the way it played out was awesome.

All in all a quick read which wasn't bad with an awesome led character.

Amelia said…
Great review! I agree with the Avery & Ben bit - like hmm, what exactly is so special about this guy? Do tell!

Samantha (A Dream of Books) said…
I really enjoyed this book and I was so excited when it arrived for review because the copy is so gorgeous and shiny!
7 February 2011 at 18:36

Michelle Fluttering Butterflies said…
You know, I usually HATE it when two characters connect in some hugely emotional way without explanation, but I just accepted it with this one, no questions asked because I thought it was done really well.
7 February 2011 at 20:54