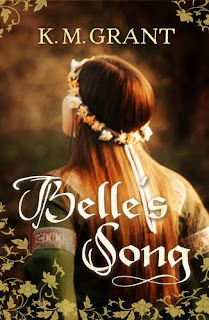 When Belle meets Luke, son of an alchemist and Scribe to the famous poet Chaucer, she is determined to travel with him to Canterbury on a pilgrimage. She hopes for a miracle: that her father will walk again. She also hopes to atone for her own part in his accident. It is a time of unrest across the country and the young King Richard II is just hanging on to his throne. A malign character on the pilgrimage suspects Chaucer of treason and slowly winds Belle into a political intrigue. At the same time, the impulsive Belle is drawn towards both Luke and to Walter, the wealthy son of a Knight. But Walter himself is in love with Luke...As the uprising against the King starts to draw pace and the web of intrigue around Belle and Chaucer tightens, Belle and her friends must risk everything to save their country and themselves...

The story is very in depth with lots of detailed description. You get a good sense of period from in about what life was life during medieval times and how people viewed the world.

The story had two parts. The first bit with the pilgrimage was very straight forward and what you'd expect. The second part looked in more depth at the political rumblings of the time mostly notably events involving the King of England, the King of France and potential plots to overthrow the King. I found these really interesting as ideas as it is a time when the King seen as divine and the punishment for suggest otherwise were severe.

I loved the relationship between Belle, Walter and Luke. I loved seeing how it developed over the course of the book and I loved the ending and how Belle did what she did to protect her friends. I loved the scenes in the court room and was gasping along as things unfolded and I liked the finally ending.

I found the story to be quite slow at times and there is a lot of detail to take in. In which case I wouldn't recommend it for younger YA readers but for older teenagers who have a keen interest in historical fiction. All in all a beautifully and intelligently written novel which will appeal to those with a strong interest in medieval historical fiction.

Ynysawdre Elderly Residents Association said…
Such a pretty cover. Does it have Chaucer quotes in it - I am *sad* and quite like Chaucer (tis dirty lol)
17 February 2011 at 08:46

serendipity_viv said…
Definitely an interesting combination. Chaucer and Canterbury. New direction for YA!
17 February 2011 at 09:56

Samantha (A Dream of Books) said…
Really want to read this one! I love K.M. Grant. Have you read any of her other books? I'd recommend the Perfect Fire trilogy.
17 February 2011 at 20:07

BookGeek said…
This is entirely different than what I've been seeing in YA! Love it. I also have a weakness for the name Luke...lol
17 February 2011 at 23:19

Unknown said…
I read the first in the Perfect Fire series but I haven't got any further than that yet. I really enjoyed it though so I'll definitely read this at some point. Great review.
19 February 2011 at 10:55

TheBookAddictedGirl said…
I've ordered this, and can't wait to read it. After your review, I'm looking forward to it even more!
Brilliant review!
22 February 2011 at 13:16