February 03, 2011
Delirium by Lauren Oliver
Published by Hodder
Challenge: None
Source: Given to me by Jesse (books4teens.co.uk) 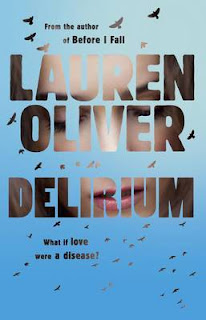 Before scientists found the cure, people thought love was a good thing. They didn’t understand that one love -the deliria- blooms in your blood, there is no escaping its hold. Things are different now. Scientists are able to eradicate love, and the governments demands that all citizens receive the cure upon turning eighteen. Lena Holway has always looked forward to the day when she’ll be cured. A life without love is a life without pain: safe, measured, predictable, and happy.

But with ninety-five days left until her treatment, Lena does the unthinkable: She falls in love.


***
Lauren Oliver's second offering as a YA author is a story set in a future dystopian world in which Love is considered a disease and removed from you when you become 18.

Lauren's book is written really well. The prose is seamless and flows nicely throughout. I liked the main characters and I thought the world and the ideas put forward were interesting. Lena was very sweet in her ideals and her world outlook. I liked seeing her interactions with her friends and was fascinated with the ide...moreLauren Oliver's second offering as a YA author is a story set in a future dystopian world in which Love is considered a disease and removed from you when you become 18.

Lauren's book is written really well. The prose is seamless and flows nicely throughout. I liked the main characters and I thought the world and the ideas put forward were interesting. Lena was very sweet in her ideals and her world outlook. I liked seeing her interactions with her friends and was fascinated with the idea of a world without love. The part that really stood out for me was the description of how parents behaved towards their offspring and how different they were towards their children without experiencing love for them. I also enjoyed how each chapter had a little "quote" from various pieces of literature that existed in Lena's world. I thought it was lovely touch that added to the richness of the novel.

However I have to be totally honest and say for me Delirium was not as good as I had hoped it would be. Don't get me wrong I enjoyed it but I had built it up so much in my head because of all the hype around the blogosphere about it and for me it fell a little short. Where I was disappointed in this book was in its pace. I spent most of the first 300 pages hoping and waiting for something to happen. I certainly wasn't gripped and could have easily put the book down and not continued and not felt like I had missed out.

That being said had I done that I certainly would have missed out because the best part about this book was the last 150 pages or so which is when a lot of what you have heard throughout the story is turned on its head and you get a new perspective on the story. This part was fast paced, gripping and all in all a bit awesome. The final chapter was heart breaking and has left me desperately wanting the next instalment in the series.

All in all is delirium a book I would recommend? Yes but only to my fellow YA book fanatics. I certainly wouldn't offer it to my friends who are less patient with reading as I can think of several other titles that are more gripping from the outset. Just like Lauren's first book it is one of those titles I had to 'stick with' to get through the build up but I am certainly glad I did.

BookGeek said…
I've been seeing this one floating around a lot as well. Thanks for the honest review! I still kinda want to check it out.
3 February 2011 at 03:31

Books for Company said…
Thanks for the honest review. l think a lot of hype around a book can make you feel a bit disappointed!
I think for me l loved the concept of the book so much (l also loved the quotes) that because its not as fast paced as some other books l didn't mind. Can see where your coming from!
3 February 2011 at 11:16

Cicely said…
I loved Delirium so much! But I agree with you about the first part being slow. I think it suited the book though.
And the end! I sobbed. So much. It broke my heart. I need Pandemonium.
3 February 2011 at 21:32

Aylee said…
I've read a few other reviews that mention the pacing. I think I just have a very high tolerance for slow pacing and that's why it didn't bother me so much.
4 February 2011 at 01:47

Jesse Owen (Reading to Life) said…
I loved Delirium but I can understand what you mean about it taking a while to get going. Thanks for an honest review :D
4 February 2011 at 10:25