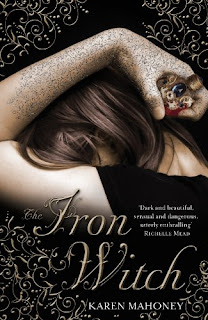 Freak. That's what her classmates call seventeen-year-old Donna Underwood. When she was seven, a horrific fey attack killed her father and drove her mother mad. Donna's own nearly fatal injuries from the assault were fixed by magic—the iron tattoos branding her hands and arms. The child of alchemists, Donna feels cursed by the magical heritage that destroyed her parents and any chance she had for a normal life. The only thing that keeps her sane and grounded is her relationship with her best friend, Navin Sharma.When the darkest outcasts of Faerie—the vicious wood elves—abduct Navin, Donna finally has to accept her role in the centuries old war between the humans and the fey. Assisted by Xan, a gorgeous half-fey dropout with secrets of his own, Donna races to save her friend—even if it means betraying everything her parents and the alchemist community fought to the death to protect.


I started reading this book despite the fact I really don't like books about fairies and am pleased to say that I did enjoy it.

I don't like fairy books on the whole. I've tried reading Melissa Marr's fairy books and a variety of others but usually they don't work for me. They tend to be a bit too airy fairy (excuse the pun) and either sickly nice and freakishly evil and I generally just don't get them. What I liked about this book is that the fey involved are only a tiny part of the bigger world which is established.

The thing that did it for me in this book were the characters. I loved all of them and I really wanted to both know what was going on with them and find out more about them and their background. I thought Donna was really sweet as a main character and really felt for her in how her life had panned out. I also loved both of the boys in her life: Nav (the best friend) and (the love interest). I can't wait to see how things pan out between the three of them and sense some sparks flying in future boys. Please don't ask me which one I like best because I don't think I'd be able to choose.

The other thing I really liked about this book was its pace. All the way through things were happened that kept me really engaged in the story. I am really fed up with books that are the first in a series that spend the entire book just slowly introducing to the world and characters and therefore contain very little action. I enjoyed following the story and this meant I finished the whole thing within a few hours because I had to keep reading.

For me the thing that will make or break this series will be how the story continues to play out in future books. There are loads of ideas and lore being thrown around and I just hope that they are put to go use and make this series as awesome as it has potential to be.

all in all finally a fairy book that doesn't drive me crazy. faced paced with engaging characters and a storyline that has left me wanting more!

Ava said…
I've read a few fairy series, and I have to agree they're not my favorite paranormal creature... but I'm interesting to see how this one will be. Great review!
11 February 2011 at 01:34

Heather (Book-Savvy) said…
I'm passing on the Stylish Blogger Award to you because your blog ROCKS!!! Go here to accept it http://book-savvy.blogspot.com/2011/02/stylish-blogger-award.html
11 February 2011 at 04:05

serendipity_viv said…
I quite like a good fairy! I would put fairies and angels at the top of my list. I have this book arriving soon, so can't wait to read it.
11 February 2011 at 12:54

Leanna Elle said…
Really good review! I'm not a fan of fairy books either, really, but I plan on checking this one out since I've heard such good things! It's nice to hear that another non-fairy fan enjoyed it! :)
11 February 2011 at 16:10

Michelle Fluttering Butterflies said…
I didn't think I was a fan of fairy books either, but I've changed my mind recently. Looking forward to this one! :)
11 February 2011 at 17:07

Vicki said…
I agree with Vivienne, Fairies are one of my faves! I enjoyed this one, certainly looking forward to more.
11 February 2011 at 19:37

Samantha (A Dream of Books) said…
I actually do really like fairy books so I'm looking forward to reading this one. I'm hoping to read it as part of the DAC too!
11 February 2011 at 20:42

Books for Company said…
l felt the same way about stories with Witches in by Carolyn MacCullough changed my mind about that. l think books are always great if they change how you think abit a certain sort of book a little bit!
11 February 2011 at 21:51

Karen C said…
I'm glad you enjoyed it even though it was fairy based. Those Wood Elves were evil little creeps weren't they?

Jesse Owen (Reading to Life) said…
I've now got a copy of this (thanks Emma :D) and it sounds so good, I haven't read many stories with fairies (or at least not without a much larger cast of other paranomals) in them and it seems like a good place to start.

Alexia561 said…
Enjoyed your review! I actually like fairies, and am really looking forward to reading this one! I agree that new series that spend the entire first book just setting the scene are boring. You can introduce characters and set the scene while still having action!

Unknown said…
I really need to hurry up and read this. It sounds so great and I have no strong feeling about fairies so I am sure I will enjoy it.
19 February 2011 at 10:20