Review: Stay where you are and leave by John Boyne 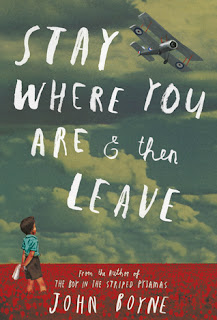 Goodreads Synopsis
The day the First World War broke out, Alfie Summerfield's father promised he wouldn't go away to fight - but he broke that promise the following day. Four years later, Alfie doesn't know where his father might be, other than that he's away on a special, secret mission.

Then, while shining shoes at King's Cross Station, Alfie unexpectedly sees his father's name - on a sheaf of papers belonging to a military doctor. Bewildered and confused, Alfie realises his father is in a hospital close by - a hospital treating soldiers with an unusual condition. Alfie is determined to rescue his father from this strange, unnerving place . .

My Thoughts
Stay where you and leave is a brilliant read which I thoroughly enjoyed.

the story is told from the point of view of Alfie who is 9. His father went to war and never returned and he can't quite fathom what happened to him because his father insist he isn't dead. Alfie helps out his mother by working as a shoe shine a few days a week and whilst doing that he finds a clue as to where his father might be and decides to investigate further.

I must admit I was never a huge fan of boy in the striped pyjamas as I found it too simplistic and I was concerned that this book would be the same for me considering the main character is so young. Luckily for me in this case it worked. I loved following Alfie as he pieced together what had happened to his father and I loved how the story addressed a lot of issues around the way serving men were treated poorly by their own regiments when they were affected by the atrocities they witnessed whilst fighting for their country. I also liked the parts of the storyline that focused on those who didn't go off and fight as they objected to the war and their treatment by the public for choosing to remain behind.

As a history teacher I really think this book is a bit of a gem. I can see myself happily using it to suggest as extended reading for those eager students who want a bit more out of the World War One unit I currently teach but we haven't got the time for in class. Being aimed at a slightly younger audience also meant it wasn't nasty or graphic in the way war stories for teens can be meaning I can happily recommend it to younger or more sensitive students without worrying about them being traumatised by what they are reading.

A really nice and thoughtful read which I really enjoyed and destined to be a modern children's classic.