We moved into a house of horrors last year and I am waiting until we have finished our renovations before I unpack all of my books (so check back in about ten years!). I do have a small bookcase near the front door though that holds my go-to books, which I am sharing a photo of today. 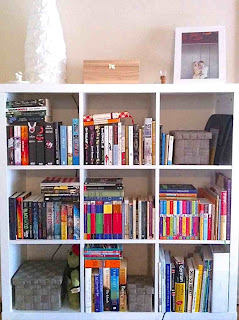 I tend to shelve my books by category (YA, Children's, Classics, etc.) and then by genre. I also like to keep like colors together within genres (e.g. books with dark covers and books with bright covers). Yes, I realize this is a bit OCD. One day I would love to have a bookcase completely sorted by color, although I am not sure how I would locate books. I think it would need its own dewy decimal system!

The bookcase is filled with my books, because my husband mainly reads non-fiction and, aside from a couple of novelty books (top-left), cookbooks and language books (bottom-right), that category is relegated to the spare room.
Here are a few of my favorite books in this bookcase:
You Know You’re A Writer When… by Adair Lara
This book makes me laugh so much. A friend saw it in a bookstore and after reading a few of its entries thought it fitted me like a glove. I have to agree. My favorites are:
·  There are three empty cereal bowls next to your computer – one for every meal.
·  You were nine when you started writing poems, twelve when you moved on to tragic stories.
·  You run out of room on Hallmark cards. (I am notorious for this whenever there is a farewell or birthday card doing the rounds at work.)
Lady Cottington’sPressed Fairy Bookwritten by Terry Jones and illustrated by Brian Froud 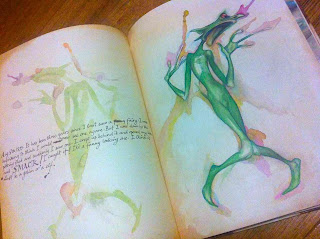 This is another book that makes me laugh. In fact, I was in hysterics when I started reading it in the bookstore and I ABSOLUTELY had to buy it. The book is the fictional diary of a girl who collects fairies by pressing them in books, as if they are flowers. It begins with a message assuring the reader that no fairies were harmed in the making of the book.
Shanghai Baby by Wei Hui
This was New Adult before there even was New Adult. This semi-autobiographical novel was publicly burned in China for its sexual content (40,000 copies, in fact!). I just love the writing style, with credit due to Bruce Humes, who has translated it beautifully from Chinese.
Excerpt:
Every morning when I open my eyes I wonder what I can do to make myself famous. It’s become my ambition, almost my raison d’etre, to burst upon the city like a firework.
Pride and Prejudice by Jane Austen
This is a much-loved second- or third- or fourth-hand copy of Pride and Prejudice from the 60s. It is one of my all-time favorite books, which inspired my young adult novel When the World was Flat (and we were in love) published by Strange Chemistry. BTW: I have a heap of Strange Chemistry novels in the bookcase too (middle- left). 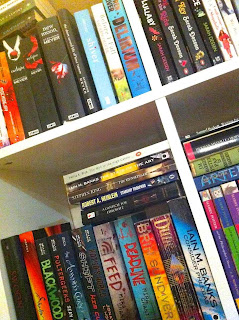 Einstein’s Dreams by Alan Lightman
This is a beautiful collection of short stories about the dreams Albert Einstein might have had while he was creating his Theory of Relativity.
Physicist Lightman creates a range of different worlds: worlds where time stands still; worlds where everyone lives forever; and worlds where time is not continuous, but stops and starts. My novel When the World was Flat (and we were in love) explores the life and theories of Einstein and I found this book (as well as a mountain of non-fiction books about Einstein) extremely inspiring.
Excerpt:
There is a place where time stands still. Raindrops hang motionless in the air. Pendulums of clocks float mid-swing. Dogs raise their muzzles in silent howls.
I will never stop collecting books, but I recently bought an eReader and a lot of my recent collecting has been done electronically. I thought this bookcase was small, but I guess my eReaderis technically the smallest bookcase in the house.
P.S. I should probably also explain the green toy (bottom-left). I have a friend who is a crafter and she made me a zombie writer (he is wearing a beret and carrying a notebook) after learning of my love of The Walking Dead. This particular friend is also an author (K.J. Taylor). I was lucky enough to also get a handmade one-of-a-kind griffin from her brilliant series The Fallen Moon. 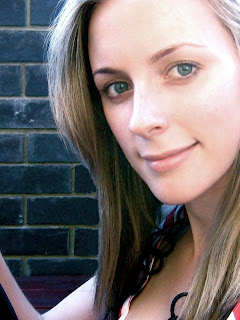 Ingrid Jonach writes books for children and young adults, including the chapter books The Frank Frankie and Frankie goes to France published by Pan Macmillan, and When the World was Flat (and we were in love) published by Strange Chemistry.
Since graduating from university with a Bachelor of Arts in Professional Writing (Hons) in 2005, Ingrid has worked as a journalist and in public relations, as well as for the Australian Government.
Ingrid loves to promote reading and writing, and has been a guest speaker at a number of schools and literary festivals across Australia, where she lives with her husband Craig and their pug dog Mooshi.
Despite her best efforts, neither Craig nor Mooshi read fiction.
Find out more at www.ingridjonach.com 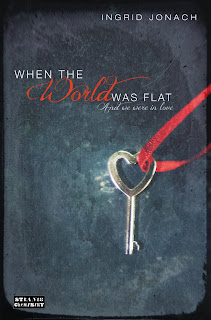 Looking back, I wonder if I had an inkling that my life was about to go from ordinary to extraordinary.
When sixteen-year-old Lillie Hart meets the gorgeous and mysterious Tom Windsor-Smith for the first time, it’s like fireworks — for her, anyway. Tom looks as if he would be more interested in watching paint dry; as if he is bored by her and by her small Nebraskan town in general.
But as Lillie begins to break down the walls of his seemingly impenetrable exterior, she starts to suspect that he holds the answers to her reoccurring nightmares and to the impossible memories which keep bubbling to the surface of her mind — memories of the two of them, together and in love.
When she at last learns the truth about their connection, Lillie discovers that Tom has been hiding an earth-shattering secret; a secret that is bigger — and much more terrifying and beautiful — than the both of them. She also discovers that once you finally understand that the world is round, there is no way to make it flat again.
An epic and deeply original sci-fi romance, taking inspiration from Albert Einstein’s theories and the world-bending wonder of true love itself.

The competition will run until 21 October 2013 and the winners will be announced on this page and via www.ingridjonach.com