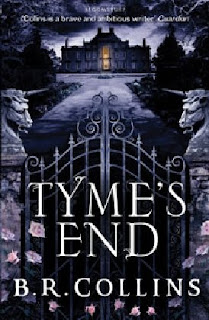 Bibi feels out of place everywhere - everywhere that is, except for Tyme's End, the deserted house that she breaks into when she thinks nobody is nearby. There she unexpectedly meets Oliver Gardner, the owner of the house, who's just returned after ten years away. Their story and the story of Oliver's grandfather becomes inextricably entwined, linked as they are by Tyme's End itself. For Tyme's End is more than just a deserted house. It is a house that by turns can be romantic, beguiling, sinister and malevolent. It is a house that had a cruel and manipulative owner. And anybody who enters Tyme's End must prepare themselves for terror ...Part mystery, part psychological thriller, set in the present yet with forays into the past, this is a cleverly ambitious novel that makes for a compulsive and gripping read.


***
I wasn't sure what to expect when I picked up this book but I found the more I read the more I enjoyed this book.

The thing I loved most about it was that it was in three parts. The first set in 2006, the second in 1996 and the final part in 1936. The characters in all three time periods overlapped and I loved jumping back in time to find out more about the story.

The first part part of the story focuses on the story of Bibi a young girl who feels out of place everywhere she is except when she spends time in an old abandoned house called Tyme's End. I found it quite difficult to warm to her initially because she was quite ungrateful and bratty in her outlook but I did start to warm to her as she started to open up a bit more when she met and started to develop a relationship with Oliver the owner of Tyme's end. I loved how their story in that time period ended and certainly didn't see it coming.

The second and third parts follow Oliver 10 years younger and then his grandfather as a young man and develops the story surrounding the mystery of Tyme's End. I loved getting into the mystery behind the house and it's colourful past owner and genuinely found many parts of a bit creepy and not sure what was going to happen next. I loved how the mystery was looked into then built up and up in a very suspenseful way that kept you wanting to read more and more (I finished the whole thing in two sittings).

A pleasant surprise, this book did not turn out how I expected it would especially when reading the first section which made it appear to be a light and fluffy ghosty sort of book. It was so much more and so much better than what I was initially expecting, an awesome read I would definitely recommend and nothing like any other YA I have read.

Stephanie (Books Are A Girl's Best Friend) said…
I have this book too and I wasn't sure what to think of it before but your review makes me more excited about reading it. Thank you Kirsty!
24 January 2011 at 07:43

Lisa said…
I think it's really neat that the author chose to do the "flashbacks/time jumping" in different sections. Some try to include them within the same content as each other and it doesn't always work.
24 January 2011 at 14:49

serendipity_viv said…
I like the fact that it is set in three different time periods. I love the cover too.Very haunting.
24 January 2011 at 20:51

Michelle Fluttering Butterflies said…
Huh. My original thought was 'probably not one for me' and then I kept reading and got more and more interested.. Funny how that happens :)
26 January 2011 at 10:51

Unknown said…
The format sounds really interesting. Three different eras. But it is the creepy factor that puts me off. Lovely review though.
28 January 2011 at 20:13