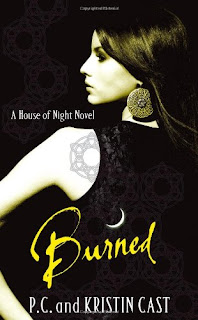 Zoey Redbird is the youngest High Priestess in House of Night history and is the only person – vamp or fledgling – that can stop the evil Neferet from raising all kinds of immortal trouble. And she might just have a chance if she wasn’t so busy being dead.

Well, dead is too strong a word. Stevie Rae knows she can bring her BFF back from her unscheduled va-cay in the Otherworld. But it’s going to take a lot more than hoping to bring Zoey back. Stevie Rae will have to give up a few secrets of her own . .


***
I started this series late last year and completely gave up before this book. Now some time has passed I've picked it up again and I have to say that this book was a definate improvement on the previous instalment in the series.

House of Night is a bit of a guilty pleasure. There is so much of it that is a little bit cringy but you are drawn in all the same.

This book is definitely Stevie Rae's book. She is developed much more as a character and gets the most of the screen time in this story. I actually liked having the break ware from Zoey because she can bug me at times. For me the character who really stood out in this is Aphrodite. I rarely go from hating a character so strongly to loving them but I actually think she is awesome and she is probably the reason why I will now keep following the series. I love that she is really bitchy but it always seems to get the job and pull the rest of the characters together as a few of them have no back bone whatsoever.

Some of the scenes were brilliant. The action scenes in this series are always really good and there were quite a few steamy scenes with different characters that popped up.It just sometimes feels like there is a lot of padding stuffed in at times.

Don't get me wrong. I didn't love the book. The Casts still insist on using the F word almost every single sentence and have made up some lovely new words of their own which are equally as offensive. They still have what could be considered appalling offensive racial stereotypes used throughout. The scottish character was so typically Scottish it was cringy but I have now come to the point when it is actually funny when all these stereotypical characters pop up.

I am not uninterested to see what awakened holds for us now that Zoey has returned. I am hoping against hope that she is a bit stronger now and that she doesn't utter the words brown pop or bullypoopy but I'm not holding my breath.

Samantha (A Dream of Books) said…
I'm still catching up with this series but I've really enjoyed it so far. I know what you mean about it being a guilty pleasure though!
25 January 2011 at 18:38

Michelle Fluttering Butterflies said…
.. :) I still have this on my shelves to read. I've put off reading it because of so many of the things that you mentioned. Use of apalling sterotypes and dialogue mostly. But Aphrodite is my favourite character and in all the previous books I have enjoyed some parts A LOT, which I guess is why I keep reading.
26 January 2011 at 10:54