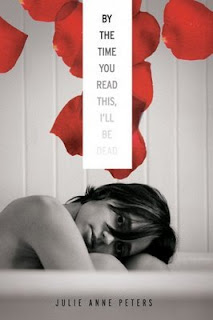 Daelyn Rice is broken beyond repair, and after a string of botched suicide attempts, she's determined to get her death right. She starts visiting a website for "completers"- www.through-the-light.com.  While she's on the site, Daelyn blogs about her life, uncovering a history of bullying that goes back to kindergarten. When she's not on the Web, Daelyn's at her private school, where she's known as the freak who doesn't talk. Then, a boy named Santana begins to sit with her after school while she's waiting to for her parents to pick her up. Even though she's made it clear that she wants to be left alone, Santana won't give up. And it's too late for Daelyn to be letting people into her life. Isn't it? National Book Award finalist Julie Anne Peters shines a light on how bullying can push young people to the very edge.(description from goodreads.com)


I can't say that I enjoyed this book as I don't think it was one you are meant to enjoy.

The story was very bleak as it follows the story of a suicidal teen in her "last" days. As a character Daelyn is clearly broken. She has suffered years of abuse at the hands of bullies and you can see why, after years of the torment, she has finally decided to end it all. This book teaches you a lot about bullying and the profound effect snide remarks and teasing can have on someone long term.

I enjoyed the character Santana and for me he was a breath of fresh air in what was a miserable story. He was clearly one of those wonderful lovely people who accept anyone and everyone as they are and goes about his life as positively as possible.

Where I had a huge problem with this book  is because I think this book would not be suitable for the age range it is aimed at especially if the young person in question was vulnerable (I'm thinking with my professional head on as I work in education). I think this book would give a vulnerable young adult ideas and help to convince them that the whole concept of suicide was a good thing. The whole notion of suicide is glorified in a twisted way (although I'm hoping that wasn't what the author was hoping to do) and the ways and means of completing such an act are given and rated out of 5 which I think is very irresponsible. I know people are going to come back to me and say that someone who is thinking about suicide wouldn't need this book to figure that sort of thing out but I still think it is very irresponsible when aimed at an impressionable audience.