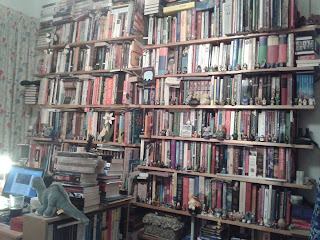 Hallo, my name is BooKa Uhu (please excuse the pen name – I’m hiding from The Work!) and these are my bookshelves. Just ignore the Lego figures and various clutter and all will be well (cross fingers). I’m a fairly new book blogger but I’ve set myself the mountain of blogging and reviewing kids books of all ages, which might explain the mess that are my shelves. A quick glance and I can see baby books (I have no children, let alone tiddly ones), Thomas the Tank Engine (that one was for fun rather than reviewing purposes, I have to admit), picturebooks (EMILY GRAVETT!), graphic novels (I’m rather partial to Nightcrawler, has to be said, maybe it’s the German in me?), YA favourites like Hunting Lila, and a whole stash of random History books, fairy tales and folk tales. So yeah, perhaps not as cool as other YA-orientated book bloggers but I’m hoping I’ve got something interesting for you anyway! The shelves also house my Lego minifigure collection, since the other walls of this room are covered with postcards, posters and traditional Zinnfiguren so there’s no room for more shelves there for my Legos. See if you can spot the Eskimo, he’s my fav!
I’ve picked some of my favourite shelves, since my shelves are so damn messy and out of order that I couldn’t really theme each shelf for this (that and I’m too short and my room’s too small to photograph an entire shelf properly). I’m quite envious of the bloggers who can do themes and that – my shelves tend to rely on which books will fit onto them rather than what genre they are, which probably explains why in front of the desk I’ve got Buffy, Star Trek (please don’t judge me!) and X-Men graphic novels rubbing shoulders with ‘Learning to Teach Number’, ‘Folklore, Myths and Customs of Britain’ and ‘Erzähl mir vom kleinen Angsthasen’ – they’re all the same size. 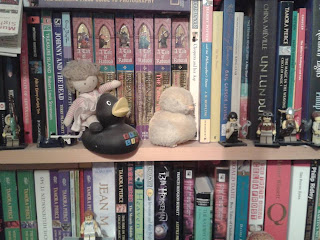 So, we got old school pb of Harry Potter (worth bupkiss, not that it would have gone anyway) and front and centre, the late great Brian Jacques’ Redwall series. I LOVED these when I was growing up and they have had to sit in state on my shelves a good ten, fifteen years after I read my first one. I loved the sense of history and tradition in them, which considering I studied History at Uni probably explains a great deal (and why I have such medieval classics as ‘Brides and Doom’ on another shelf). They’re brilliant epic fantasy for 9-12 year olds and I was still collecting the series when I was well outside that age range. They’re just... bah, I mean – you follow whole family trees of characters throughout the series, as generation after generation passes through this monastery, creating their own legends as they go. It’s just EPIC. I cannot let them go, ever.
Also there is Tamora Pierce, whose character Daine I so admired as a teen. She was feisty, without being all Mary Sue-ish and perfect. I used to daydream about being able to conjure up magic between my fingertips like her tutor Numair Salmalin, and Pierce’s other character Keladry is one of the best heroines I can think of to look up to. She’s steady, determined and staunch in her belief that yeah, a girl can learn how to be a knight, and whup bullies behinds in the process. I also loved that she was an introvert, but still managed to stay steady and achieve her goal, which is something I’ve kind of taken to heart.
I’d like to point out The 13th Horseman there too – I only got sent this proof about half a year ago but it’s just brilliant. Seriously witty is the banter therein, I can tell you – it’s like Terry Pratchett almost, only more whimsical. I was seriously sniggering as I read that one and I had to explain to my colleagues why without getting the Raised Eyebrow. It all revolves around a boy called Drake who mistakenly finds himself filling in as the new Death, as the Four Horsemen of the Apocalypse find themselves one short. Why is he filling in for Death? Well, the previous 9 Deaths sort of went ‘mad, mad, suicide, mad, quit, mad, goldfish, suicide, mad’.  That’s going to be one of my first reviews this year, really can’t wait. I’m very fond of books with that sort of mad, Terry Pratchett/Jasper Fforde-esque style to them. There’s a couple of their books lurking on the ‘Slightly larger than regular paperbacks’ sized-shelves. 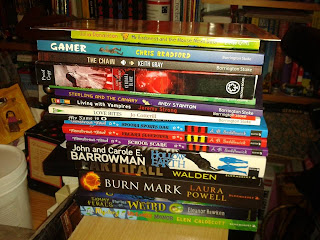 This is one of several  To be Read piles, they’re kind of dotted about the room really. I would show you, but that would mean unburying the bed with all the stuff I took off the desk to write this showcase up on (including, of course, more books). I’ve got  a couple of books up there by Barrington Stoke because even though I’m not dyslexic, I’m really keen to get behind books that gather dyslexics in, so reading and reviewing Barrington Stoke books seems like the natural thing to do. I kind of got sidetracked researching dyslexia when I was studying to be a teacher and my preoccupation with it has stuck. I’m even attempting to work out a way to make my blog more dyslexia-friendly. There are some pretty cool books in that picture – My Name is O was especially awesome and a favourite of mine, Chris Bradford, has been writing for them too. Gamer there has a lenticular cover which kept me entertained for a good few minutes. Really neat, packed-in quick reads that just happen to be tailored for dyslexic eyes too. 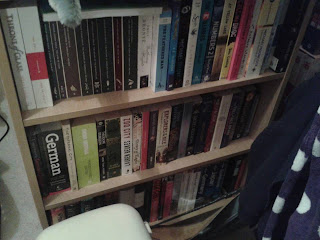 This is the mini bookcase in front of the other bookshelves – I may have run out of room for shelves. Just ignore the Brontosaurus tail on the top there, he’s a bit of a diva when it comes to photos. These are mostly newer books and proofs, which explains why Throne of Glass (of mad Twitter fame) is there.  I didn’t think I’d like it at first, since I’m not a massive romance fan but one thing Maas is really great at is building a world that sucks you in. That and her main character is easy to fall in with, somehow managing to stay both naive and worldly wise at the same time.  This whole bookcase is basically my  main To Be Read list, so it’s got Diterlizzi, Eragon, BZRK, Breathe and all sorts on there, and usually has a couple of piles on the top too. I’ve recently been hankering after some more scifi to really get stuck into, since I’ve finally figured out that’s the genre I’m most drawn to. Forbidden Planet has a good chunk of this bookcase to answer to. Just out of shot is a bag filled with more books from there, including a Cherie Priest novel that’s been winking at me for several months. 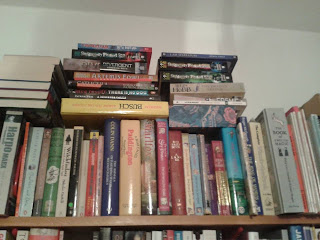 Last one! This is at the very top of one of the wall shelves and it’s got some of my favs on there – There is no Dog is brilliantly funny, and I grew up with the Beyond the Deepwoods series. I have to buy any books of Paul Stewart’s and Chris Riddell’s just on principle now, I loved them so much. I would happily read a bus ticket if they pen-and-inked it. There’s also an Andrew Lang Green Fairy Book there too. A Scottish collector of fairy tales and folklore, he produced loads of books just of fairy stories, each a different colour. My dad bought a load of them second hand from the library when it was having a turn out years ago and they’re some of my most precious reads. A really nice alternative to the usual bog standard fairy stories, you get some really unusual ones (although not quite as bizarre as some of the one’s in Angela Carter’s book. Icelandic fairies are weird). Oh! And Harpo Marx’s autobiography. One of the sweetest reads ever, and you don’t have to know who he is to enjoy his stories of Vaudeville and classic Hollywood. I’m a big fan of his – seriously, watch him play the harp in his films, the transformation from a clown to a man absorbed in his music is astonishing. Just a really lovely read.
And that’s it! Hopefully that wasn’t too random and there was some cool stuff in there, lurking. I’ll say one thing, I never knew my bookshelves were so nostalgic, or that my new kids books habits are so different to my old ones, I seem to be passing on or borrowing more kids books now than I did when I was younger. You learn something new every day!
Thank you very much Kirsty for allowing me to babble!