Review: All these things I've done by Gabrielle Zevin

April 06, 2012
All these things I've done by Gabrielle Zevin
Published by Macmillan 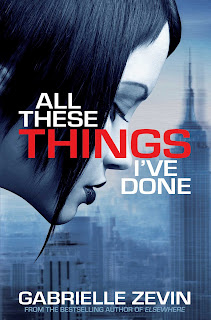 Sixteen year-old Anya becomes the head of a mafia family after her parents are both murdered by rival gangs. Although Anya is embroiled in the criminal world, she is determined to keep her brother and sister out of the mafia family, but her father's relatives aren't so keen to let them go. When Anya's violent ex-boyfriend is poisoned with contaminated chocolate – chocolate that is produced illegally by Anya's mafia family – she is arrested for attempted murder and sent to the notorious jail on Manhattan Island.

Eventually she is freed by the new D.A. in town, who believes she has been framed. But this D.A. is the father of Win, a boy at school to whom Anya feels irresistibly drawn, and her freedom comes with conditions. Win's father wants to be mayor, and he can't risk having his ambition jeopardised by rumours spreading that his son is seeing a member of a notorious crime family. Anya knows she risks the safety of her family by seeing Win again, but the feeling between them may be too strong to resist...


***
I loved loved loved this book. I was original, fast paced and engaging with brilliant characters who were easy to relate to. I cannot recommend it highly enough and can't wait to read the next book in the series.

The absolute thing about this book with the lead character Anya. At 16 she's virtually head of her family as her Nan is about to die, her parent's were both murdered when she was younger and her older brother was involved in an accident that left him with the brain of a 8 year old child. Keeping them and her younger sister safe is no mean feat as her father was one of the most notorious crime bosses in New York, a fact that no one seems to want to let her forget. She's brave and feisty and quite prepared to do anything to help ensure they are safe.

The world the book is set in is scarily realistic. Its set in the not so distant future and the world has become a slightly more difficult place as resources are running short and lots of commodities are either heavily rationed, heavily priced or outright banned. It is actually a bit of an eye opener to see how things could go if solutions to some of the problems we are currently facing aren't solved by some clever genius.

Anya's wider family aren't the sort of people you mess with. They have taken up the slack since the death of her rather running the family's illegal chocolate business.

Anya for the most part just wants to keep her head down and stay out of trouble and try to get on with her life as best she can, looking after her siblings and going to school. She doesn't like complications and just wants an easy life. She dumps her boyfriend for putting too much pressure on her. The break up isn't all that smooth and starts a chain of events that change Anya's life.

To start with Anya meets Win whilst waiting outside the Principal's office waiting to be punished after thrown lasagne over her ex boyfriend (I told you she was feisty). After this encounter their relationship blossoms. Win is, put quite simply, a really lovely guy. he's sweet, funny and caring but unfortunately his father (and vice DA) doesn't approve of their relationship at all.

The next incident starts when Gable (the ex) arrives at her door wanting chocolate. Anya gives in and gives him some so he'll leave. Anya thinks nothing more of it but then suddenly finds herself arrest and thrown in a prison like institution for attempted murder and isn't released until it is apparent the incident is part of far wider problem within the family business.

Without wanting to tell you anything that might spoil this book I won't go into any more detail about the story line except to say that things for this point continue to be fast paced and intriguing. I loved the relationships Anya has with the various members of her family and her close friends. I love seeing how she fares when she steps her to the table and get involved with the family business in order to put her house into order. I also really admired the lengths she was willing to go to in order to help her family. She was also completely bad-ass in the final few scenes at the dance. I can't wait to see how she develops in the next books

All in all a superbly brilliant book with an excellent led character who I loved. A novel I am sure I will continue to recommend for years to come.

Cait said…
Awesome review! I loved this book so much and Anya is definitely one of my fave characters of 2012 so far. Cannot wait for the sequel

The Insouciant Sophisticate said…
I loved this book too-we had a lot of the same thoughts about it. I just cannot wait for the next installment!
16 April 2012 at 05:40