Bookcase Showcase.  Author R.S. Russell
I learned this morning that I have too many books and too many bookcases. Because of this, my bookcases often end up shelving and eclectic array of other objects that have caught my fancy over the years. As for any reasonable arrangement of books by genre, topic, date, etc., …forget about it. I don’t even know what genre means anymore.
I have no idea what might be made of the photo below. Other than my ignorance of how to focus a cell phone camera, I do notice that books I am currently reading tend to end up in stacks on their backs… if not in a bookcase, then on the coffee table, mantel, and dresser top in my office at home... 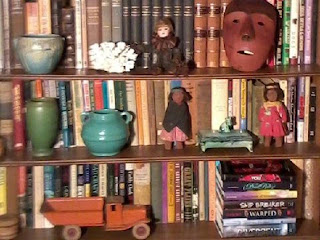 As a folklorist (aside from writing fiction), my home reading material is more likely the stuff books are created from, rather than books themselves. I am obsessed with learning what I can of the human heart and with collecting old diaries, journals, letters, photos… and anything else where I might stumble across individual folk history.
Below is a recently acquired batch of 35 (or so) letters than have captured my full attention. Each has been multi-folded to the size of a note you might pass to a friend in school (see the red circle in the image).  Within the first few letters, the method of exchanging letters between a mountain farm girl and the boy she has a crush on is described in detail. Letters were sent by placing them under a rock near the well on the girl’s family farm. 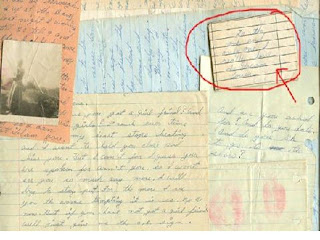 My primary-source reading material is full of ghosts … Tucked away on one of my bookshelves is a series of love letters from a girl called Joan to her boyfriend from around 1959-1961. She is about 15-years-old at the time of the letters. She died in 1963.  Her letters are ardent, to say the least, expression of an overwhelming first love. As I was writing Dead Rules I kept Joan in mind.

Keira said…
I don’t even know the way I finished up right here, however I assumed this publish was great. I do not realize who you are but definitely you are going to a well-known blogger in case you are not already. Cheers!
21 April 2012 at 04:49