April 15, 2012
The Enemy by Charlie Higson
Published by Penguin 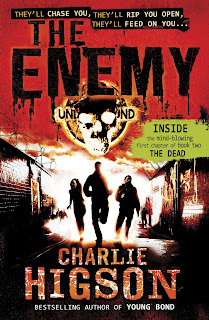 What if every adult under the age of 15 was transformed into a mindless, bloodthirsty zombie.  This story follows the plight of a group of children who find themselves living in a nightmare version of London where exactly this has happened.  One year on from the collapse of civilisation the children of London find themselves drawn into groups for survival, avoiding marauding adults while trying to find the essentials for living such as food and shelter.  This book explores how different groups of youngsters would deal with this scenario and how communities would be formed with conflicting ideas of how the human race should continue to survive.  The book deals equally with human-zombie confrontations as much as human-human ones.
This is a chilling read with a high body-count and graphic descriptions.  It is also a little unnerving to read not just what the adults will do if they were to catch you but also what the humans are prepared to do to one another to prolong their own existence.  Certainly the author has no qualms about killing off people, including multiple lead characters, just as the reader has gotten got to know them.  This leaves you wondering if anyone is safe.  Certainly each time someone fell under the onslaught of zombie hordes I really wasn’t certain whether or not they would be getting up again.
On the strength of this book I’ll certainly read the next.  Burning questions for me are: