December 21, 2010
Skinned by Robin Wassermann
Published by Simon and Schuster 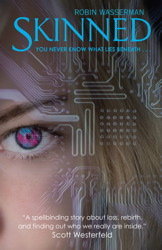 Lia Kahn was perfect: rich, beautiful, popular - until the accident that nearly killed her. Now she has been downloaded into a new body that only looks human. Lia will never feel pain again, she will never age, and she can't ever truly die. But she is also rejected by her friends, betrayed by her boyfriend, and alienated from her old life.

Forced to the fringes of society, Lia joins others like her. But they are looked at as freaks. They are hated...and feared. They are everything but human, and according to most people, this is the ultimate crime - for which they must pay the ultimate price.

The first book in a gripping series


***
I picked a copy of this up a while ago and hadn't got round to it until recently.

The positive
I loved the premise of this book. It is set in a world where it is possible to download a person's brain into a machine and that they can therefore live forever as a 'skinner'. You get the impression that it a relatively new idea and that the population at large isn't wholly comfortable with machines 'living' amongst them. The story follows a girl called Lia who after a car accident wakes up to find that she has become one of the skinners and follows her journey after the events, looking at how she copes in readjusting to her old life in a new body.

I was fascinated with the wider world the story was set in - as you go through you get snippets of information about a world that has been ravaged by nuclear war and it completely different from the one we live in - I hope more of it is explored in the future.

Samantha (A Dream of Books) said…
I haven't heard of this book before so thanks for bringing it to my attention. I really like the sound of it so it's yet another one to add to the wishlist!
21 December 2010 at 15:41

Karen C said…
I just came across this via your link within boxes and it looks great. I hopped over to Amazon and found it for £2.81 incl postage! Bargain! It will be in my IMM next week. Thanks for your review and I'll push past that slow start.
23 July 2011 at 21:27