I am proud to say I got into Twilight before it became to huge success it was. Before my book blogging days I read but not to the extent I read now and would only get through a couple of books a month. My husband often would order me a couple at christmas and they would often be titles I would never have heard about before because I wasn't aware to the same extent about what was about as I am now.

One christmas about 4 years ago I received this .. 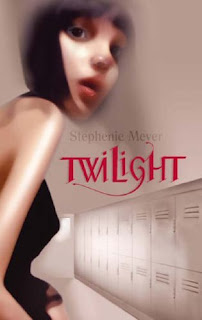 I hadn't heard anything about and my husband bought it for two reasons. One he looked at another book I had just finished and saw what was recommended by Amazon for people who had bought that book. Secondly he said the picture reminded him of me (I still don't know quite how to take that as it is a little freaky but I suppose the hair is like mine used to be in the days before I used to see my current hairdresser - who is fabulous and semi famous)

I picked it up a day or two later and finished it within days totally hooked on the whole thing.  After that I worked my way through the rest of the series - it was quite weird seeing how the excitment around it built up especially by the time book 4 came out.

I love Bella as a character - yes she can be a little dippy at times and often doesn't make a decision (sometime I want to shake her and say get on with it). I love the boys and will never be able to pick between Edward or Jacob. I love the extended cast of character including Alice and Bella's dad.

What I also love about the books is that even when nothing is happening I am completely engrossed in what is happening. Yes the action scenes are awesome but I also love the bits where the characters are just interacting on a day to day basis.

All in all this is a series I love - yes I have enjoyed the films even though they aren't quite up to what I think they should be (but then again when is the film ever as good as the book) and I will be very excited when breaking dawn comes out. I am eagerly awaiting the series guide and I hope that Stephenie does get round to publishing more books set in the twilight world. If you haven't read it (and I can't believe there are people out there who haven't) get a copy and get reading asap

Samantha (A Dream of Books) said…
I absolutely agree with you 100%! I have to say that I was a latecomer to the Twilight saga and actually only read them for the first time this year but as soon as I picked the first book up I was hooked. I stayed up late every night reading the whole series until I'd finished because I just couldn't bear to put the books down.

I love the amazing characters (although I'm definitely an Edward fan!) and I was so sad when the adventure was over. I would love to read more about them all!
23 December 2010 at 13:46

Aylee said…
What a freaky cover. I really love the special edition white UK covers though!
24 December 2010 at 21:02

Michelle Fluttering Butterflies said…
Oh, I really loved this series as well. I was working in my beloved bookstore when I recieved a proof copy of this book with this cover and I fell in love. I could NOT put the book down at all. I didn't even want to lend the bok to my co-workers because they were all horrid spine-breakers.
4 January 2011 at 11:56