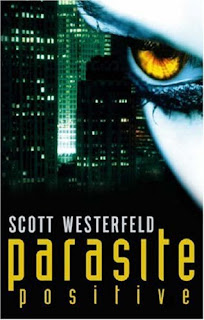 
***
The thing I really like about Scott Westerfeld is that his writing is so diverse. Everything of his I have read so far has been completely different to all the other things I have read of his. This series is no different.

Parasite Positive (Peeps for my readers in the USA) is no exception. It is a vampire story with a twist. In this world all vampires, are not vampires as such and just people infected with a certain parasite.

the story was fast paced and full of action. It was really creepy in quite a lot of places (I never want to see a rat again and I am a little freaked out when I see my cat at the moment). I also liked that it was quite witting and funny in places too.

The only thing I did not like was that the book alternates between Cal's story and chapters about parasites. They grossed me out so much that I stopped reading them.

All in all a short and quick read which is refreshingly original.

Michelle Fluttering Butterflies said…
Hmm. I keep reading positive reviews of this one lately, but for me it would have been on my book-break-ups list!!
17 December 2010 at 14:10

Jesse Owen (Reading to Life) said…
Ooh! How have I not heard of this one before, my wishlist has just grown :D

Kat said…
Oh, this is Peeps! When I first saw this, I assumed it was a new Scott Westerfeld book and did a mini-freak-out. I love Peeps, though I must say I like the new cover and title, Parasite Positive, better than the US one. Great review. :)
18 December 2010 at 19:51