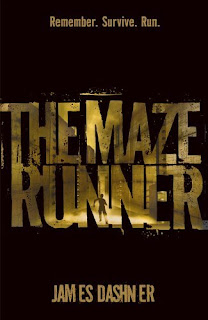 When Thomas wakes up in the lift, the only thing he can remember is his first name. His memory is blank. But he’s not alone. When the lift’s doors open, Thomas finds himself surrounded by kids who welcome him to the Glade—a large, open expanse surrounded by stone walls. Just like Thomas, the Gladers don’t know why or how they got to the Glade. All they know is that every morning the stone doors to the maze that surrounds them have opened. Every night they’ve closed tight. And every 30 days a new boy has been delivered in the lift. Thomas was expected. But the next day, a girl is sent up—the first girl to ever arrive in the Glade. And more surprising yet is the message she delivers. Thomas might be more important than he could ever guess. If only he could unlock the dark secrets buried within his mind.


***
I'm not going to lie, I struggled with this book at first and actually considered giving up with it and moving on to something else. You are dropped into a world where you do not know what is happening or why it is happening and I found it very confusing as a reader. I also got frustrated as I didn't think all that much happening of that much interest in the first 250 pages or so and the characters themselves didn't have a lot of depth

I did like the idea behind the story and I liked how the boys interacted with each other, complete with their abrupt manners and own cursewords (reminding me of a variety of children I have taught over the years) and there were a few creepy moments with the grievers.

The book did redeem itself somewhat in the last section and everything that happened it was fast paced and interesting (not sure I actually got it all) and I think the series as a whole could be very good based on all the ideas thrown about.

Certainly a series I will be looking to continue to read through but I am hoping the pace picks up and I start to understand what is going on!

Aylee said…
I've read that before in another review, that it was hard to get into and confusing at first. Well, it's definitely on my TBR anyway. I would love to give it a chance; hopefully I don't give up on it at first.
13 December 2010 at 01:37

Julia @ That Hapa Chick said…
I agree that the characters needed to be a bit more developed. But then I thought about the fact that not even the characters remembered who they really were and it kind of made me rethink it. And don't worry the series definitely gets better in The Scorch Trials! :)
13 December 2010 at 03:36

Ynysawdre Elderly Residents Association said…
J just read this for me (I am awaiting the review *sigh*)
He did say that it was quite repetitive in places and the own language was a bit annoying :D
17 December 2010 at 08:07

Michelle Fluttering Butterflies said…
I've heard a lot of people complain that this one's confusing. I think that's why I've put off reading it for so long..
17 December 2010 at 14:06