December 03, 2010
Shadow Kiss by Richelle Mead
Published by Penguin (thank you for the review copy guys!) 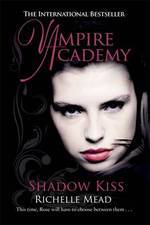 For Rose Hathaway, everything seems out of kilter. Ever since she made her first Strigoi kills, a dark shadow has been creeping over her. Looming in the background, too, is another realization: If she follows her forbidden love for guardian Dimitri Belikov, she might lose her best friend forever. And these sleep-shaking worries couldn't have come at a worse time. The immortal unloving are prowling everywhere, famished for vengeance against her. An adrenaline-laced episode of the teen pop favorite Shadow Academy.


***
another awesome instalment in the Vampire academy series.

I liked several things about this book. Without giving too much away I'll go through my favourites bits. Just like the previous two books there is a lot of build up but when things finally kick off it really kicks off.

I loved the scenes at the royal court. I am desperately hoping the next books in the series spend some time at them as the political side of the courts fascinates me.

The story line with Rose and Mason and the whole deal with her being shadow kissed and the link between the two is awesome.

I loved that the novices were on Field experience for their future role of guardians. I love seeing how the differing characters stepped up to the role and others didn't.

I love the story arch that looks at the "dilemma" of the Moroi using their magical abilities and in particular those using spirit. There is so much more to be developed here.

The Strigoi fights were awesome. I particularly enjoyed the scenes with Rose and Christian kicking ass together - they were an awesome team and I hope they do more with them together.

Finally I didn't see the ending coming and wanted to sob for Rose. I dying to see how everything plays out!

Carissa said…
I love love love this series! Shadow Kiss had a hard ending to swallow, but it was still wonderful!