Bookcase Showcase is back. Today's shelves are from author Niall Leonard whose book Shredder (third in the crusher series)  is out now 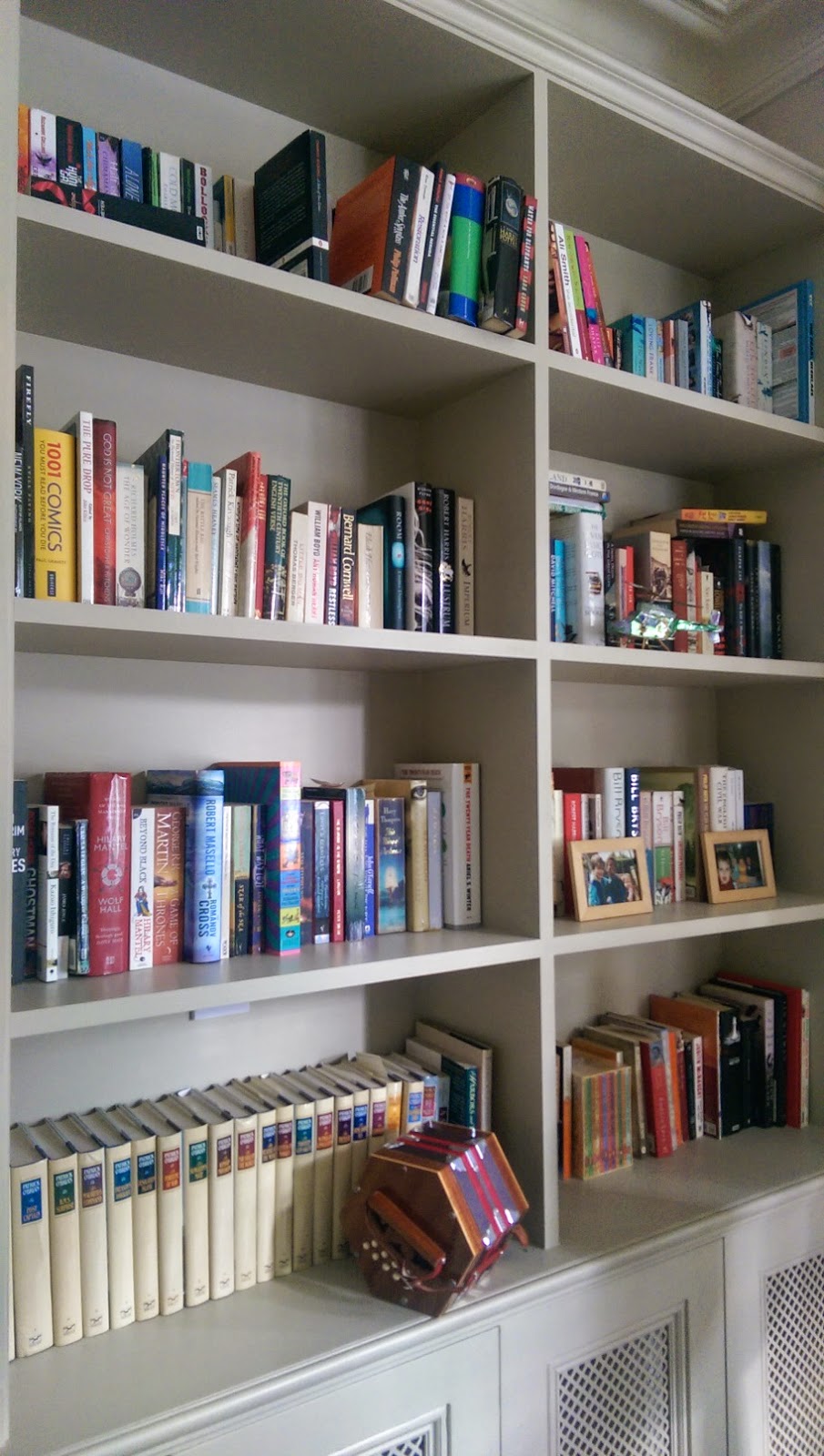 We moved house quite recently, and many of our books are still in boxes waiting to find shelf space.  I've crammed some of mine into this corner, but I still haven't got round to sorting them by author, or finding a section for the non-fiction, or the poetry, and whenever I try I seem to end up lost in a book... 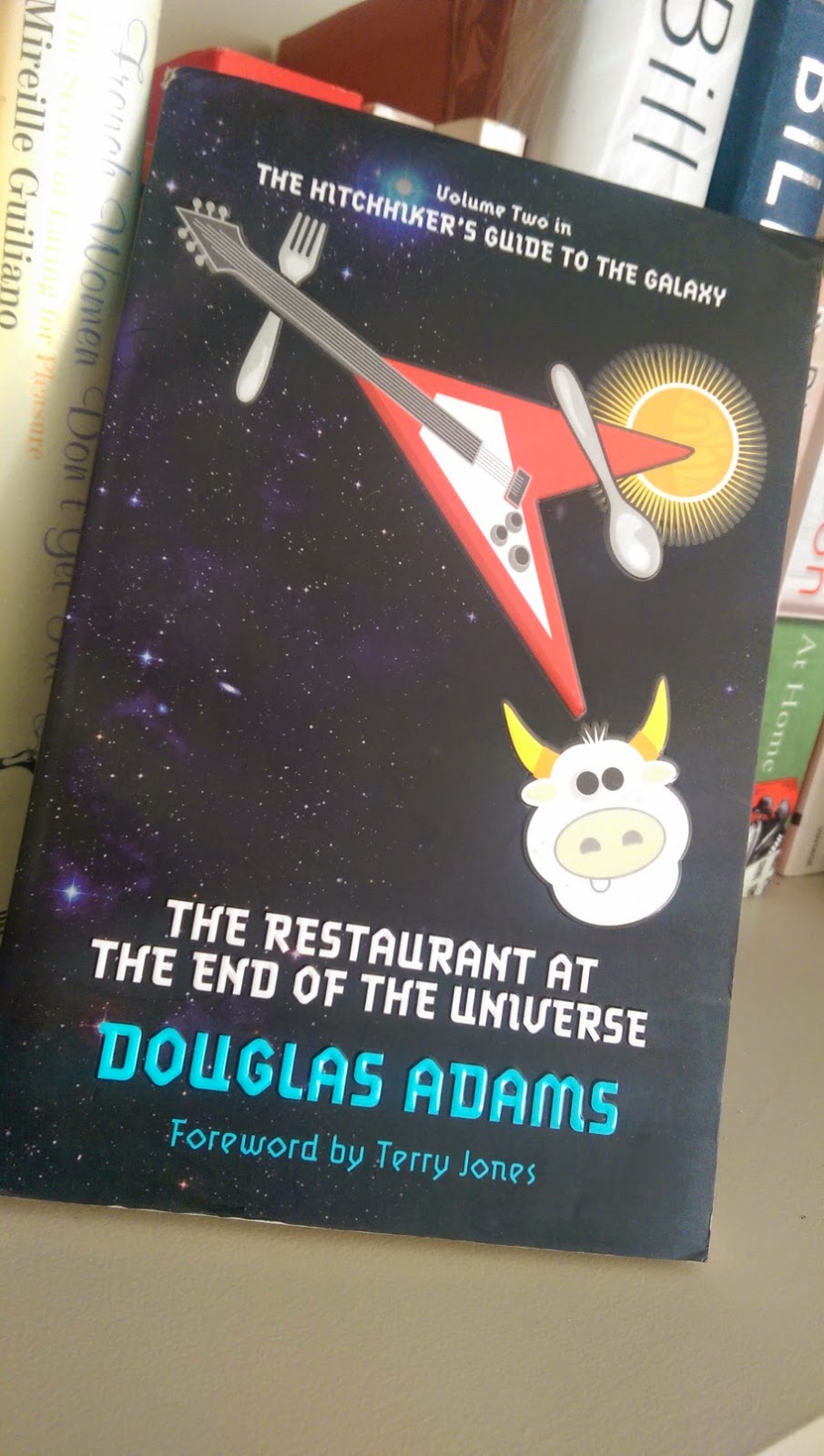 Anyone who has read The Restaurant at the End of the Universe by Douglas Adams will remember that infernal machine the Total Perspective Vortex, designed to show drive its victims mad by showing them just how puny and insignificant they were against the vast scale of the cosmos.

I used to feel that way every time I went into a bookshop.  Surrounded by millions of stories by hundreds and thousands of wonderful authors, how could I ever choose the right book?  What if there was an even better one on another shelf further along?  When I first thought of writing a novel myself, I felt a similar dread – with so many wonderful books out there, who would ever choose to read one I'd written?

Luckily I got over my paralysis, and wrote my YA thrillers the Crusher Trilogy, the last instalment of which was published in June 2014.  With writing, as with reading, the trick is to start in a genre you love and expand from there.  I've always loved thrillers, and working for years in TV writing crime mysteries taught me that it's never as easy as the best writers make it look.  King of the crime novelists today, in my opinion, is Lee Child, whose beautifully constructed and meticulously researched yarns keep me hooked to the last page.  Look, here's a copy of his first ever novel that he inscribed with a special message to me... 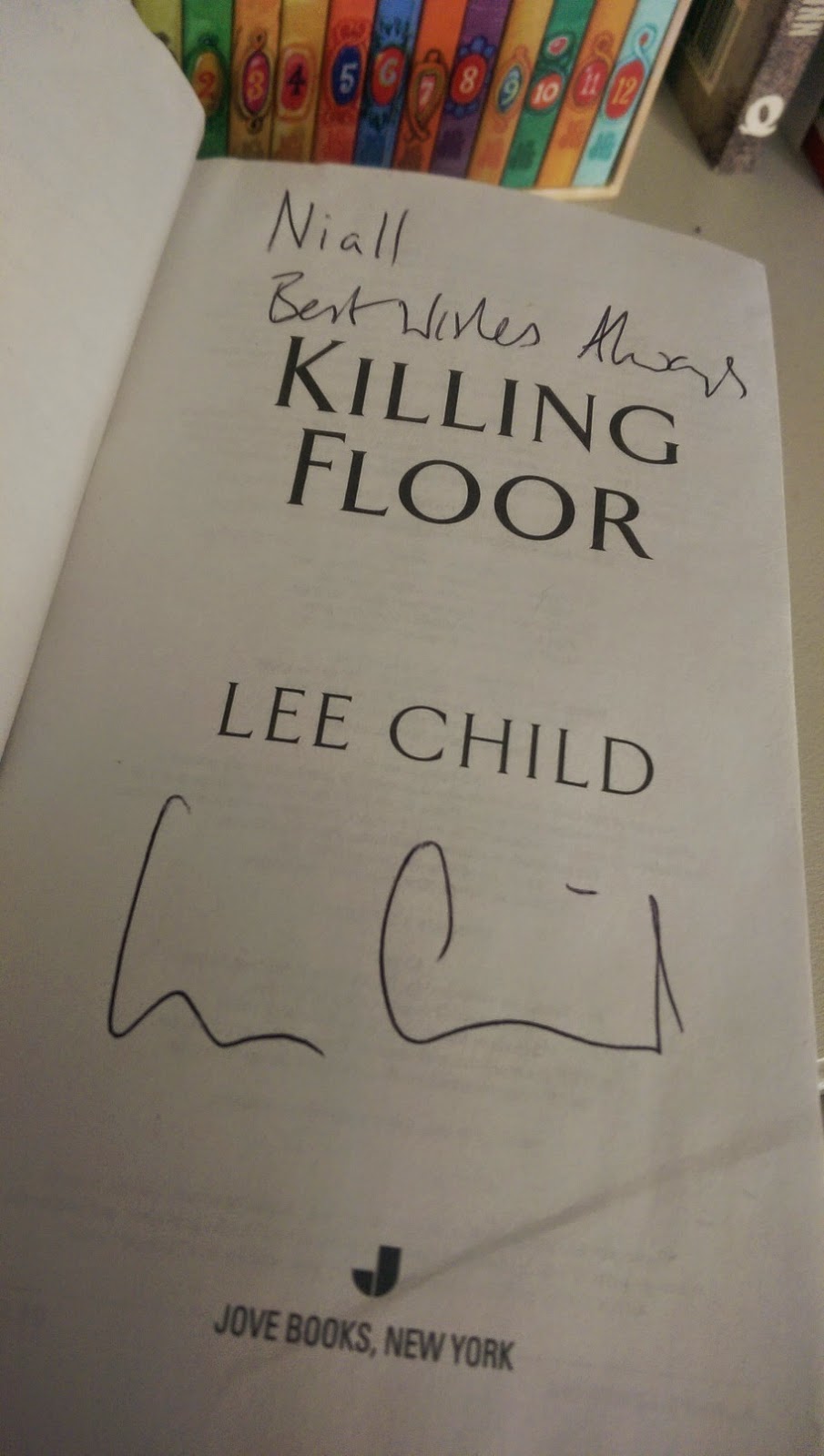 Except he didn't – a friend at a book convention in the USA asked him to sign it on my behalf. But I can always pretend.

The other genre I love is the historical ripping yarn; years ago one of my brothers introduced me to the bawdy, wicked Flashman novels of George MacDonald Fraser. Sadly none of the twelve are on the shelves because I read the paperbacks so often they fell apart.  The next time I fell in love with a series of historical novels I made sure to buy them in hardback: 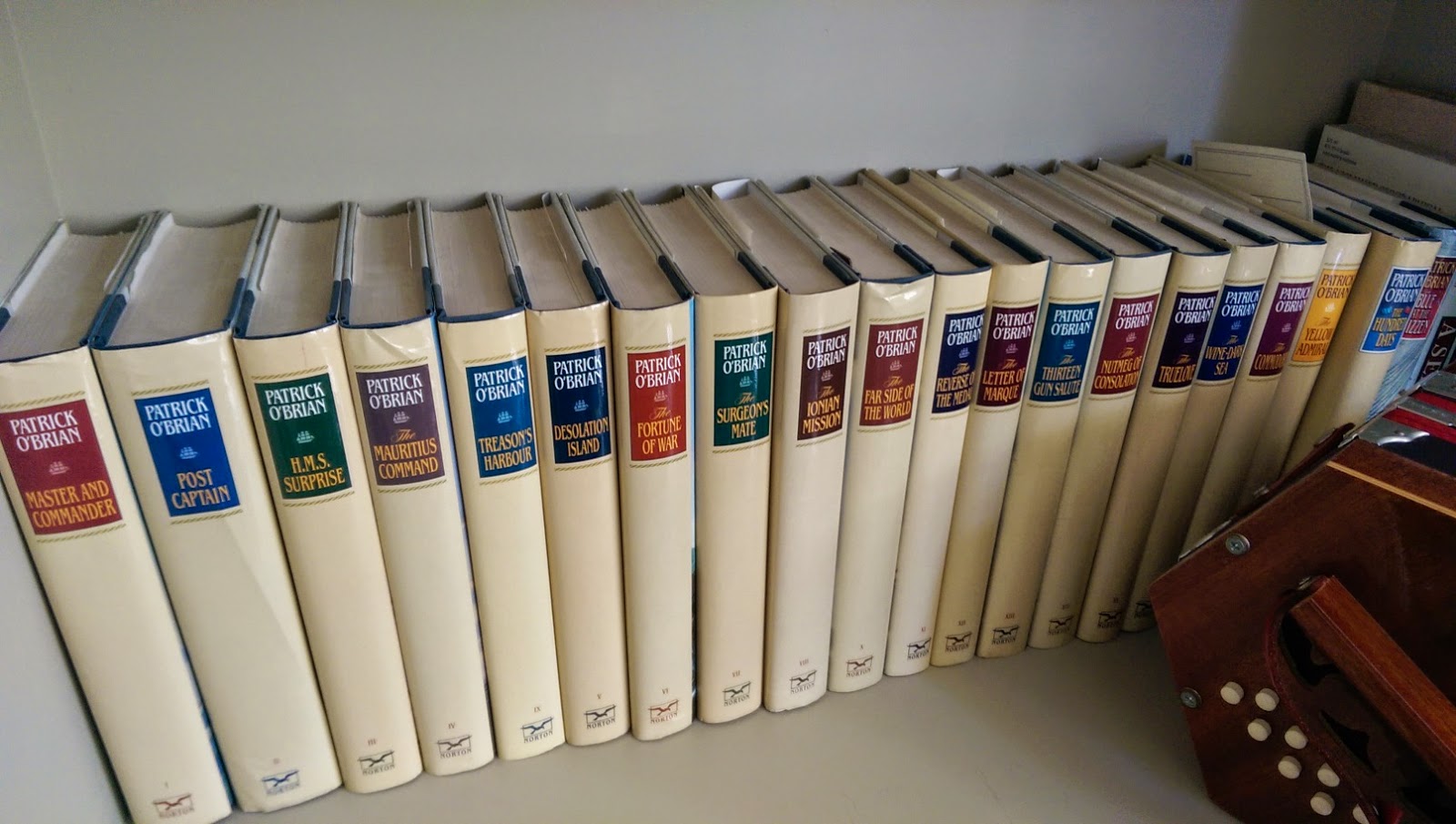 I've lost count of the times I've read Patrick O'Brien's Master and Commander 20-volume series featuring Captain Jack Aubrey and his friend the surgeon and spy Stephen Maturin. The sheer epic scale of O'Brien's achievement, with amazing characters and storylines that evolving over decades, constructed with breathtaking detail and utterly convincing period dialogue, fills me with a deep sense of admiration and personal inadequacy.

Above the O'Briens are some of the novels I've read and re-read over the last few years, some recommended by friends, other discovered by chance – like  This Thing of Darkness by the TV producer Harry Thompson, who died tragically young.  Centred on the voyage of the Beagle, it's a wonderfully vivid and engaging novel that reconstructs the moral and philosophical debates that Darwin's discoveries and theories provoked.  Everyone I've lend this novel to has loved it... apart from my brother, as you can see from the note he wrote me. What can I say?  The man has no taste. 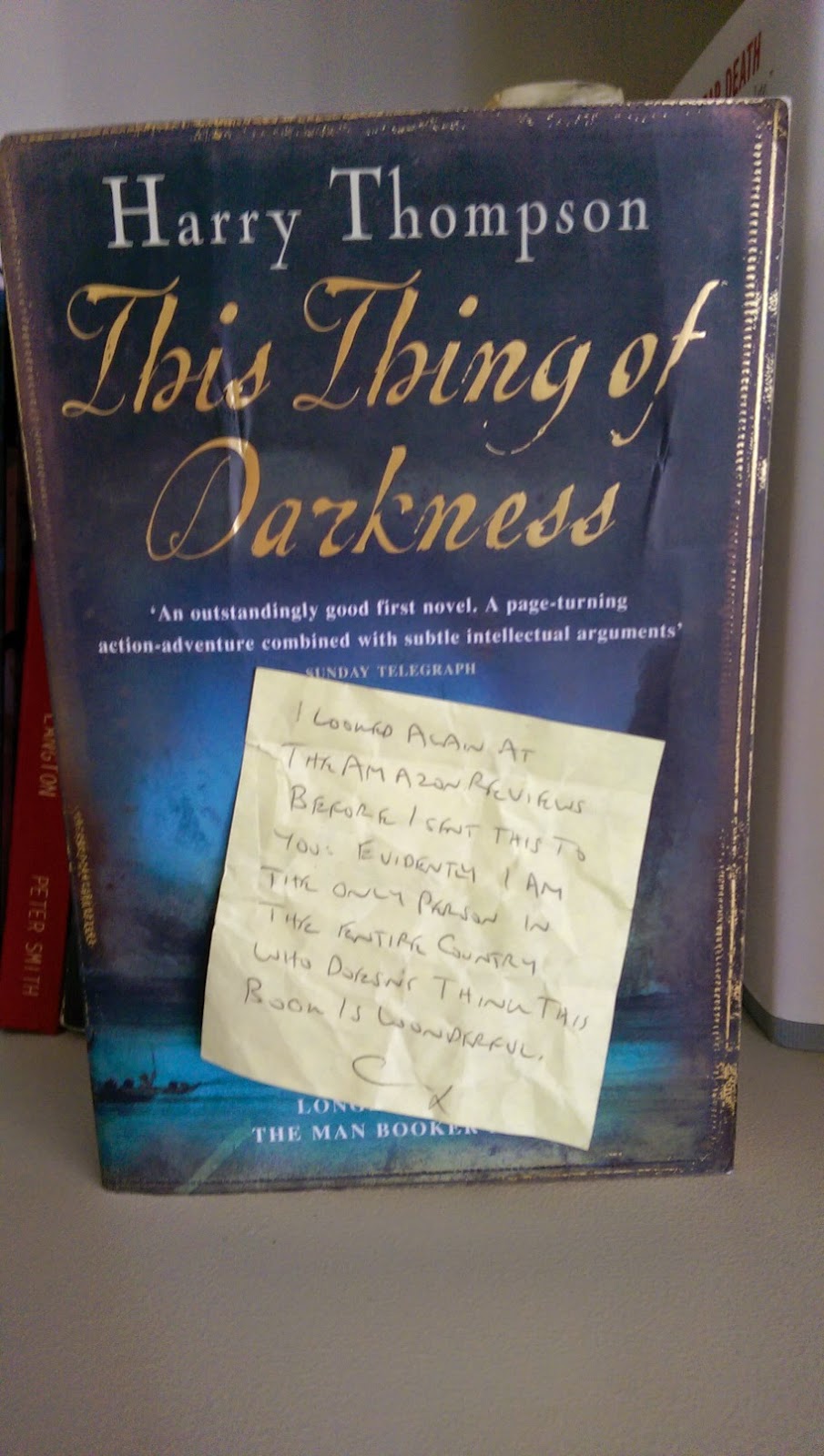 Someday I'll write another Crusher novel, but I've decided that before I do I shall try my hand at a ripping yarn based on actual historical events.   I've  found the character and the story; I'd show you my research bookshelf, but it would give too much away...

Maybe I'll never equal the standards of my literary heroes, but that's no reason not to try.  Besides, if I let myself be intimidated by the achievements of other authors, I would probably want to throw in the towel every time I saw  this bookshelf: 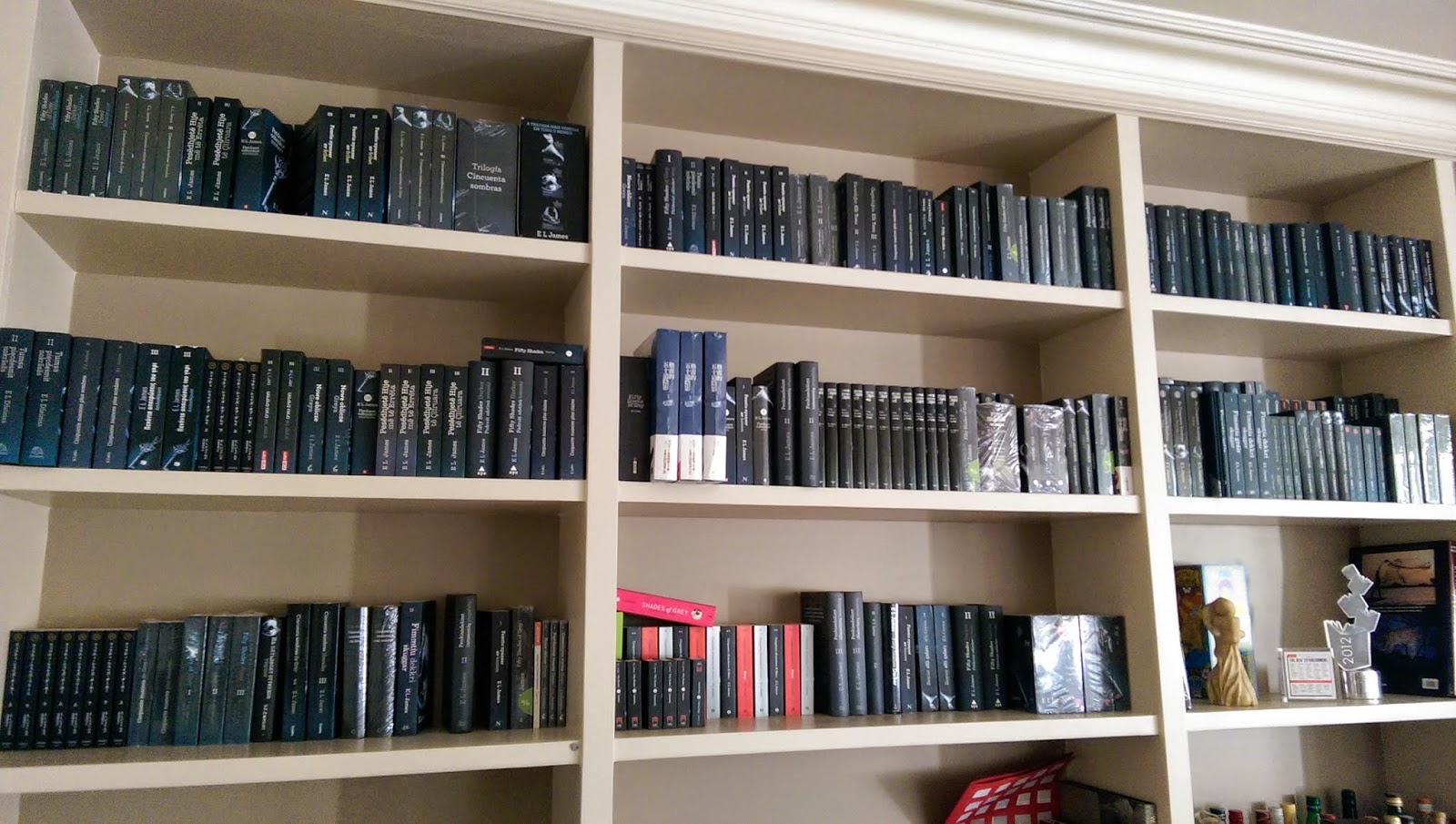 My darling wife Erika, aka EL James, has now sold 100 million volumes of the Fifty Shades trilogy in more than 60 languages, including Mongolian, Mandarin and Hebrew. These are just a few of the foreign editions.

Who needs a sci-fi Total Perspective Vortex when I have one in my living room?