Review: Such as Rush by Jennifer Echols 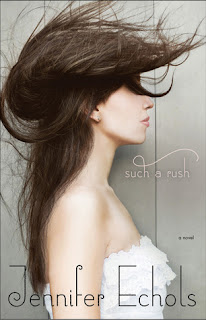 A sexy and poignant romantic tale of a young daredevil pilot caught between two brothers.

High school senior Leah Jones loves nothing more than flying. While she’s in the air, it’s easy to forget life with her absentee mother at the low-rent end of a South Carolina beach town. When her flight instructor, Mr. Hall, hires her to fly for his banner advertising business, she sees it as her ticket out of the trailer park. And when he dies suddenly, she’s afraid her flying career is gone forever.

But Mr. Hall’s teenage sons, golden boy Alec and adrenaline junkie Grayson, are determined to keep the banner planes flying. Though Leah has crushed on Grayson for years, she’s leery of getting involved in what now seems like a doomed business — until Grayson betrays her by digging up her most damning secret. Holding it over her head, he forces her to fly for secret reasons of his own, reasons involving Alec. Now Leah finds herself drawn into a battle between brothers — and the consequences could be deadly.

A brilliant lead, hot twin boys and aeroplanes! What's not to love?

I have been excited about this book for a long while as I've enjoyed most of what I've read of her work so far. This one lived up to my expectations for several reasons.

Firstly I loved the lead Leah. She's had an awful time of it growing up living with an absentee mother who spends more time off with her string of no hoped boyfriends drinking rather than working to pay to bills and keep a roof over Leah's head. This has meant that from a young age Leah has had to work to pay the bills and keep on top of all the things involved in running a household. It gives her an interesting outlook on life as she is determined to better herself and not repeat her mother's mistakes.

Now one thing I loved is seeing Leah's passion for flying. She loves it so much she manages to get a job at the local airport and persuades the owner of a local banner flying business to teach her to fly. When he dies she suddenly finds herself stuck with no option to fly until the business owner's twin sons Alec and Grayson come back to continue running their father's business. I loved the scenes where Leah is flying because you just get how much she loves it and how flying is her entire world and how it gives her something to focus on.

I also liked seeing the way in which Leah was treated by girls in her class because she is so poor. The way in which they treat her is awful and the reputation she has which isn't based on any sort of truth is insane. She's seen by her peers as being the local slut even though she's done nothing to deserve such a reputation and she's not made welcome at parties. For me it really highlighted how badly girls can treat each other.

I loved the twins in this book. Alec and Grayson are both gorgeous and both very different. I loved the love triangle built up between the three of them in its weird and mixed up way. I won't tell you too much about what happens but I will tell you that the sexual tension is immense!

All in all a book I really enjoyed

Michelle Fluttering Butterflies said…
I only sort of skimmed your review because I have a copy coming my way very soon, but I am such a Jennifer Echols fangirl! Can't wait to read this one.
17 August 2012 at 14:55