Review: The Hunting by Sam Hawksmoor 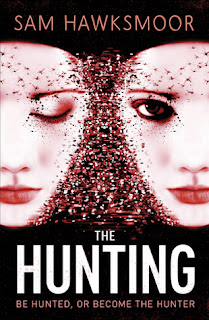 Genie and Rian thought they'd beaten The Fortress and stopped the dreadful experiments. But now someone even more ruthless has taken over, and wants to investigate why the experiments didn't kill Genie Magee. She is Fortress property, he claims - along with the other survivors.

Now there's $10,000 reward on their heads, armed roadblocks on the highway, and the dreaded threat of 'Mosquito' that can shut down their brainwaves by using their genetic information against them. There's only one possible escape from the bounty hunters with shotguns, and that's down the wild unforgiving river to a bleak future forever on the run.


Or they must turn and face The Fortress, find out its secrets, and use them against it. Seize their lives back, and fight for their very right to exist!

The hunting was a book of two parts for me both of which that were very different from one another.

The first part of the book focuses on continuing the story started up in book one, following the story of Genie, Rian and Renee as they try to escape the clutches of the fortress and the evil scientists who are trying to experiment on them. Like book one it is fast paced and exciting from the word go. The action keeps the reader on the edge of your seat as you follow the group. I loved the relationship they had between them and seeing the lengths they had to go to to get free and then later on the things they need to do to take the fortress on. Up until this point I really enjoyed the book and seeing how the story finally ended after waiting since the beginning of the year. I wished the book finished at this point.

The last bit of the book was where I wasn't so sure. The last section follows the group once they've escaped the fortress and follows them as they settle into their new life. This part of the book was really slow and the brilliant relationships that I loved about the series was blown apart and it was completely heart breaking to see.

All in all an interesting series which lots of good ideas I only wish it had finished 100 pages or so sooner.

Annette Mills said…
I've never heard of this series. Sounds interesting. What is the first book?
19 August 2012 at 16:04