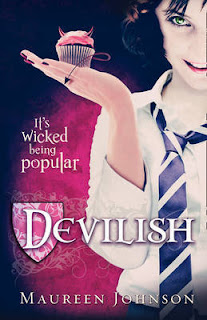 Wickedly funny high school satire - what would you give to be popular? Ally and Jane may not be that popular but they're good friends...that is until they each get allocated a freshman, a 'little' to show the ropes to at school. Cracks begin to show as Ally changes into a whole different person, literally overnight. She's dressed better, making new friends, and ditching Jane more and more. But Ally's transformation has its price. And it's up to Jane to save her former BF from a ponytail-wearing, cupcake-nibbling devil in disguise!


On the positive side I thought devilish was a really funny read. You can really hear Maureen's voice throughout it and the whole thing really showcases her wit and sense of humour perfectly. When I read it I could also hear her narrating the book to me.

I also quite liked the main character in the book because she was funny and warm hearted and spent a lot of time trying to do what was right in an impossible situation.

However all things considered I don't think this was really the book for me. I struggled with relating to the majority of the characters and I thought that there wasn't all that much going on plot wise to keep me fully engaged. I found it a by more simplistic and wanted a bit more substance to it to get my teeth into.

Not quite the read I had hoped it would be and for me not the strongest offering I have read from Maureen Johnson.

Michelle Fluttering Butterflies said…
Yeah. It definitely was different than I expected it to be. There is that humour and strangeness that you'd expect from MJ, but it needed more to it.
23 August 2012 at 16:19