May 28, 2012
Spell Bound by Rachel Hawkins
Published by Simon and Schuster
Hex Hall #3 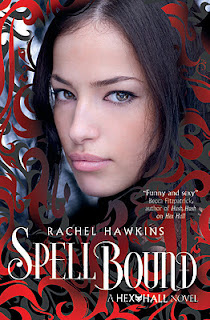 Just as Sophie Mercer has come to accept her extraordinary magical powers as a demon, the Prodigium Council strips them away. Now Sophie is defenseless, alone, and at the mercy of her sworn enemies—the Brannicks, a family of warrior women who hunt down the Prodigium. Or at least that’s what Sophie thinks, until she makes a surprising discovery. The Brannicks know an epic war is coming, and they believe Sophie is the only one powerful enough to stop the world from ending. But without her magic, Sophie isn’t as confident.

Sophie’s bound for one hell of a ride—can she get her powers back before it’s too late?

I've really enjoyed the Hex Hall series. They've got a brilliant lead, cracking storylines and are pacey enough to keep my turning the page long after I should have put down my book to do something else.

I did enjoy this instalment and thought it was a nice ending to the Hex Hall series. Without giving too much away there were some brilliant twists and revelations as everything fell into place. the final show down was epic and I enjoyed the sense of satisfaction at the end as everything tied up and fell into place.

(The next sentence is a little bit spoliery)
That said I am a little gutted about Cal and how things turned out for him in this book but I think that is probably due to the fact that I hate hate hate Archer. There's just something about him I do not like at all.
(end of spoliers)

Overall I really have series this series. It's kept me guessing, made me laugh and thoroughly entertained me for three books and each book in the series is as strong as the last which I am increasingly finding not to be the case in trilogies.

The Insouciant Sophisticate said…
This book actually pretty much reconciled me to Archer who I loathed in book 2 (disliked in book 1). I still don't love him but my opinion of him improved. So sad over Cal though!
28 May 2012 at 03:11