May 22, 2012
Raising Demns by Rachel Hawkins
Published by Simon and Schuster 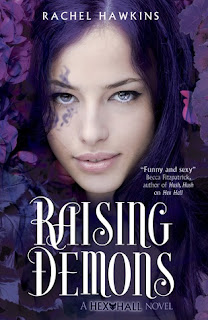 Sophie Mercer's first term at Hex Hall turned out to be quite eventful. First the ghost of her evil grandmother haunted her every move, then her best friend was accused of murder and of course there was the discovery that Archer Cross, aka the boy of her dreams, was actually an undercover demon hunter - which would probably be something she could have worked on, if she hadn't also discovered that she was actually the demon Archer was hunting…
So, despite their issues, Sophie is actually relieved to be spending the summer in London with her father. But when your father is Head of The Council of Prodigium and your summer is being spent at the headquarters of everything magical, then a quiet holiday isn't really that likely. And, as Sophie struggles to come to terms with her new found demon powers, she finds herself thrust once again into a world of dark magic and conspiracies. The only thing that could possibly make things more complicated would be for Archer Cross to show up again, which of course he wouldn't, would he?

I have been meaning to get round to reading this book for ages after really enjoying book one and I must say I enjoyed this one too.

I love Sophie as a character. I liked see more of her in this book and seeing a different side to her as she starts to develop a relationship with the father she never knew as she grew up. I loved seeing how similar they were even though Sophie didn't want to be like him and would love to see the two of them really kick some ass in future books.

I loved that the book changed location to England and loved seeing the headquarters through Sophie eyes. I also had a dawning realisation when I was reading this ... are there now medieval castles in the USA? (my historian heads thinking logically says no there can't be) that makes me sad for you :(

The one thing I don't get about this series is Archer. I don't see how everyone else thinks he is hot. I am team Cal all the way. I love Cal and I would love it if he and Sophie got it together as I think he is a gorgeously brilliant character and I would love to see more of him in the books.

The storyline was as pacey and witty as ever meaning I really enjoyed reading the book and finished it really quickly. I felt that both the story progressed but also set the stage for the final one in a way which didn't leave me feeling cheated which I have found can happen a lot in second-in-the-series-titles.

I am looking forward to the next instalment muchly.

The Insouciant Sophisticate said…
I'm Team Cal all the way too! Archer sucks! You may not love the third book, just a warning...

I think it's really interesting that the title was changed for the UK. I almost passed this by until I saw that the author was Rachel Hawkins. I thought she had come out with a new title.
22 May 2012 at 03:57