May 16, 2012
Dreams by Daniela Sacerdoti
Publishing by Black and White Publishing 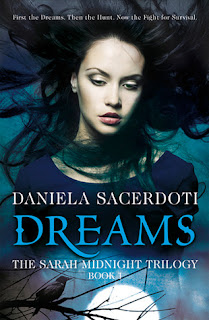 “You’d never think it could happen to you. You’d never think that one day you’ll stand in a graveyard, rain tapping on a sea of black umbrellas, watching your parents being lowered into the earth, never to come back. It’s happening to me. They said it was an accident. Only I know the truth. My parents were hunters, like their parents and grandparents before them, hundreds of years back, scores of ancestors behind me, fulfilling the same call. I must follow in their footsteps. I am the only one left to keep the promise. I can never give up the fight, this fight that has been handed down to me, thrust upon my unwilling shoulders. I’d rather be buried with my parents, my brave, fierce father and mother, who lived and died by the Midnight motto: Don’t Let Them Roam.”

Ever since her thirteenth birthday, seventeen-year-old Sarah Midnight’s dreams have been plagued by demons—but unlike most people’s nightmares, Sarah’s come true. Her dreams guide her parents’ hunt as Sarah remains in bed, terrified but safe, sheltered from the true horrors of the Midnight legacy. But all this is about to change. After the murder of her parents, she is cruelly thrust into a secret world of unimaginable danger as she is forced to take up their mission. Alone and unprepared for the fight that lies before her, Sarah must learn how to use the powers she’s inherited and decide whom to trust before it’s too late..

Sarah is an ordinary girl with dark secret which has placed the weight of the world on her shoulders. In her dreams she sees the most terrifying things and she's trying to make sense of a world in which people whom she doesn't know are trying to kill her because the fate of the world rests in her hands.

What I particularly liked about this book was that it was paranormal romance set in the UK. I loved how British it was and am now even more excited about visiting Edinburgh in the summer and seeing all the places mentioned in the book.

I loved Sean/Harry and the relationship he builds up with Sarah. It is clear to see that he adores her and I cannot wait to see where their relationship goes in future books. The way it is written had a bit of Jace/Clary feel to it. Two people that aren't supposed to be attracted to each other but there is something there underneath it all that tells you that they could be.

For me I found there was a lot of 'getting to know you' time in this book. For me this slowed the pace down which slowed my reading speed down. I know you need this especially in a series but I would have liked the action and storyline to have been more pacey throughout the entire book. That said I did enjoy that when things kicked off they really kicked off. This book is quite visual and allows you to get under the skin of what Sarah is seeing and experiencing quite well.

All in all a series which I am keen to continue as I am really interested to see where it goes next.