May 11, 2012
Black Heart Blue by Louisa Reid
Published by Razorbill 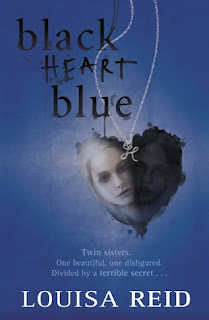 Hephzibah: You've no idea what it's like having a freak for a sister.

Rebecca: Born first, prettier, Hephzi's always been the popular one.

The Father: When he was busy with his bottle we were usually safe. Usually.

The Mother: Her specialist subject was misery and lessons of painful silence ...

Hepzibah and Rebecca are twins. One beautiful, one disfigured. Trapped with their loveless parents, they dream of a normal life. But when one twin tragically dies, the other must find a way to escape. Because if she doesn't, she'll end up like her sister


***
Black Heart Blue is a touching book which I really enjoyed because it is unusual and both sad and heartwarming at the same time.

I really enjoyed the way this story was told. It it told it split narrative for the majority of the book switching between the twins. One looks backs of the events the story is set around while the other is present tense. As a reader you are therefore trying to make sense and fill in the gaps between the two narratives which is something I really liked about it.

The best thing about this book is following the story of the twins as they go out into the real world after living like prisoners with a father who treats them like animals and hides them away from the world and tells him it's because they are evil. I like seeing how the girls interacted with the world in their own different ways and found myself wanting to go and take them away from everything they went through.

The story goes along nicely as you start to find out more and more about what has been going on behind those closed doors that the girls have been hidden behind all their lives the more you feel for them. Towards the last third is when everything starts to come out fully and the revelations pack a real emotional punch.

While the book is very sad I did enoy that it was uplifting too and had some nice things to say about human nature. I particularly loved the character Danny who Rebecca meets part way through the book. I loved the role he ends up playing and seeing how pivotal he and his family were to changing things for Rebecca for the better.

All in all a book I enjoyed which really made me think.

Cass said…
Ooh, I like that there are two perspectives throughout the book: one in past, the other in present tense. Sounds like a great book. Thanks for the review!
15 May 2012 at 11:39