January 06, 2012
The Court Painter's Apprentice by Richard Knight
Published by Catnip
Read it for The British Books Challenge 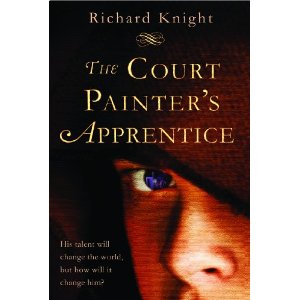 The Court Painter's Apprentice is a wonderful little book which is beautifully told and featuring one of the most amazing twists I think I have come across in a long time.

I think Catnip's editor is spot on when she compares the writing style in this book to being like early Pullman titles. It has brilliant characterisation and a fab storyline which immerses you in the historical period in which it is set.

The story follows Johann a young boy with a talent for drawing and painting as he goes on a journey of a lifetime. He is the boy of an inn keeper who is spotted for his talent by the King's Court Painter who takes him on as his apprentice.

His life an as apprentice is an interesting one to follow. You see him as he learns the business from the bottom up and follow him on journey to the King's court to assist his master whilst he paints the King and his family. As time goes on and Johann starts to paint his own portraits you start to see how he has a special twist to his talent. As people start to notice this gift his work becomes more and more popular to the point where he gets the attention of the king himself. He then receives the honour of being asked to produce a portrait of the Prince for The King. Johann takes up the challenge which gains him even more admirers but still doesn't understand the implication of his gift.

The final section of the book is when the story twists after Johann challenges himself to do a self portrait. I won't go into what happens but will tell you that it was very creepy and a little unsettling. The best bit though was I could have never guessed how the book was going to go.

Definitely a book I would recommend and certainly one to look out for when it comes out in January.

Anonymous said…
Ooh! This one sounds interesting, I'm not sure I'd have normally picked it up but you compare like early Pullman. Hmm, you have me intrigued :)
6 January 2012 at 21:44

Raimy from Readaraptor Hatchling said…
Loved this one, can see how it can be compared to Pullman but I also thought the ending was very Chris Preistley-ish! Great review!
15 January 2012 at 12:11