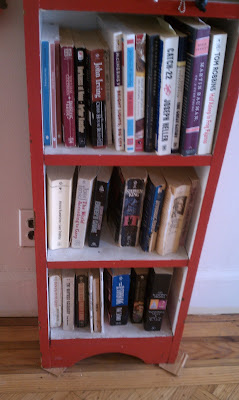 The first thing you need to know about me is that when I was growing up, I was only allowed to buy books on special occasions. My father believed that only suckers bought books when the library was giving (okay, lending) them away for free. So even though I read several books a week when I was a kid, I barely owned any of them. It meant the ones I did own were special—not to mention reread over and over again, because in an emergency situation (ie no new library books on hand) they were the only thing in the house. And for a long time, even after I grew up and no longer had to play by my father’s book-buying rules, I stuck with the habit of only acquiring books that I knew I was truly going to love.
This tiny red bookshelf, which once belong to my father and began its life in his childhood bedroom, came with me when I moved into my first apartment, and it’s been with me ever since. And in that first apartment, my entire book collection pretty much fit on these three shelves.  (Suffice it to say I’ve now expanded. A lot.) To this day, no matter how many other bookshelves I add (again: a lot), this is where I keep my oldest and most treasured books: some that used to be my favorite, some that are held together with scotch tape and memories, some that just stay there because that’s where they’ve always been, and a couple (like that Jay McInerney collection in the bottom righthand corner) that got stuck there by some random well-meaning apartment tidier who apparently didn’t understand my system. And a few of them are the touchstone books of my life that I still reach for when I need to be reminded of why I love to read and why I bother to write.
That’s what I’d call It, at the center of the middle shelf.  This Stephen King epic (now ragged and covered in years of masking tape) has been with me since middle school, when I used to read it approximately one a month to convince myself that evil, whether in the shape of a killer clown or a nasty gym teacher, could be triumphed.  It was my survival manual, and I still read it every now and then when I need a bravery boost.  (Just below It is King’s The Stand, which I love almost as much, but that one I got out of the library – probably five or six times. I didn’t own it until a few years ago when I got bored in an airport and decided it was finally time.)
Next to It is Jitterbug Perfume, the Tom Robbins book (first of many I would read, and read, and read again) I discovered in eleventh grade.  It blew my mind. For the next couple years, I was my own personal Tom Robbins fan club.  I read everything he wrote, I tried desperately to write like him, I used a ponderous-sounding quote of his in my yearbook profile. (Not this one, although maybe it should have been: “Should you fail to pilot your own ship, don't be surprised at what inappropriate port you find yourself docked.”) I was devoted.   I don’t even remember how I found Jitterbug Perfume, since at the time I was reading almost nothing but science fiction and horror, but that book showed me a new way to think about words, not to mention about the world.
On the other side of It we have Ender’s Game, the Orson Scott Card book about a smart, nerdy, unpopular kid who’s undervalued by his peers until he goes on to save the world. No comment as to why I might have carried this one around like a safety blanket in my day.
Most of the other other books (except for Dancing on My Grave, in the lower left hand corner, a deliciously melodramatic memoir about the horrors of professional ballet that someone lent me at summer camp one year—and never got back, because I became so obsessed with the story that I took it home with me) come from the summer between sophomore and junior year of college. As I said, I read mostly sci-fi and horror in high school. When I got to college, I discovered everyone else seemed to have spent their formative years reading Tolstoy and Shakespeare and a bunch of contemporary authors I’d never even heard of. I felt like an idiot. An uneducated idiot.  So the summer after sophomore year, which I spent all alone in New York, with nothing to do but sit on park benches and read, I decided to remedy the problem.
I set out to read at least some of the books I’d missed…and to my shock I discovered it was possible to love a book even if it didn’t have aliens or time travel or quantum leaps. (Though those are still a plus.) This was the summer I fell in love with Philip Roth, William Styron, F. Scott Fitzgerald, and Joseph Heller. (Neither Tosltoy nor Doestoyevsky, though as you can see from the thick tomes on the second and third shelf, I tried my best.) I read and swooned over Bright Lights Big City (the best book to read when you’re on your own in NYC for the first time), Darkness at Noon, In Cold Blood—and while I borrowed some of them (cf that tattered copy of Goodbye, Columbus on the far right) from my parents’ basement, most of them I didn’t.  That summer, I did the unthinkable: I started buying books.
I haven’t stopped.

Cait said…
aww I love that story!! and the bookcase is so sweet. I didn't really start buying a load of books until I was quite a bit older either, most of mine came from libraries or birthday gifts.

Anonymous said…
Fab post, Until recently the library was one of my only sources of books (handy that it's just up the road :D)

Mel said…
I used to get all my books at the library as a kid as well - although I occasionally used to save three weeks pocket money and buy a shiney new book! I love your story about reading Stephen King as a teen - It is my favourite of his as well! :)
7 January 2012 at 17:48

Karen said…
Such a great post! I was raised the same way... and now I'm a librarian! Since I'm always at the library anyway, I still keep up the 'only buy books you love' policy. It's the only thing keeping my husband sane until we build our dream house with a library - and then HOO BOY!
8 January 2012 at 19:33

Michelle Fluttering Butterflies said…
What a great post! I love that cute little red bookcase. Also, if I had one like it in which I only kept really important and dear to me books, my battered copy of Ender's Game would be on it as well! :)
17 January 2012 at 11:32