Review: The Book of Blood and Shadow by Robin Wasserman

January 10, 2012
The Book of Blood and Shadow
Published by Atom 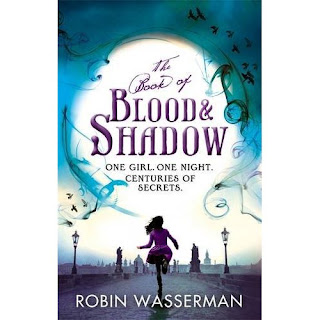 It was like a nightmare, but there was no waking up.  When the night began, Nora had two best friends and an embarrassingly storybook one true love.  When it ended, she had nothing but blood on her hands and an echoing scream that stopped only when the tranquilizers pierced her veins and left her in the merciful dark.

But the next morning, it was all still true: Chris was dead.  His girlfriend Adriane, Nora's best friend, was catatonic. And Max, Nora's sweet, smart, soft-spoken Prince Charming, was gone. He was also—according to the police, according to her parents, according to everyone—a murderer.

Desperate to prove his innocence, Nora follows the trail of blood, no matter where it leads. It ultimately brings her to the ancient streets of Prague, where she is drawn into a dark web of secret societies and shadowy conspirators, all driven by a mad desire to possess something that might not even exist. For buried in a centuries-old manuscript is the secret to ultimate knowledge and communion with the divine; it is said that he who controls the Lumen Dei controls the world. Unbeknownst to her, Nora now holds the crucial key to unlocking its secrets. Her night of blood is just one piece in a puzzle that spans continents and centuries. Solving it may be the only way she can save her own life.


***
The Book of Blood and Shadow is a brilliantly different offering in the YA and a uniquely offering which the thing I enjoyed most about it.

The story follows Nora as she finds herself unravelling a long buried mystery with frightening consequences.

I liked the whole premise of the book. The mystery is unveiled through a series of letters which Nora translates from Latin written by a girl 500 years ago. I loved this idea and seeing how the story and the letters were interconnected even though at times I felt it slowed down the pace of the story somewhat.

I loved the setting of the book and enjoyed seeing Prague through Nora's eyes. You got a real feel for the place through the description and I actually really want to go there myself now.

There were loads of twists, turns and double crossings in this book. There were several bits within the book when I something was revealed I didn't expect to and I was stunned as I really didn't see it coming. I won't even begin to go into the plot or I might spoil something.

A book for you if you want to read a completely different YA novel which is pacey with engaging and interesting characters.

Natalie_vintage_girl said…
been hearing lots of good things about this one. sounds great!
10 January 2012 at 11:06

Vicki said…
I love the sound of the old letters. I meant to start this last week but got side tracked. This weekend I think.
10 January 2012 at 20:03

Mel said…
Prague is a city full of character and I love that the book is set somewhere different from the usual places! :-)
11 January 2012 at 20:18

Michelle Fluttering Butterflies said…
I really loved this book, probably especially the letters. And definitely Prague. I loved how different reading this book felt to everything else I've read lately..
17 January 2012 at 11:36