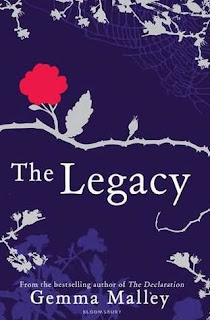 When a Pincent Pharma lorry is ambushed by the Underground, its contents come as a huge surprise - not drugs, but corpses in a horrible state. It appears Longevity isn't working and the drugs promising eternal youth are failing to live up to their promises. A virus is sweeping the country, killing in its wake, and Longevity is powerless to fight it. When Richard Pincent of Pincent Pharma suggest that the Underground has released the virus, something has to be done to put the story straight and once and for all alert everyone to the truth.


***
This series blew me away when I first read it. The entire concept was awesome. The world seems ideal - no one dies as drugs have been developed meaning that no one gets old, or ill and can live forever. As a price for eternal life people are no longer allowed to have children unless they opt out of the drugs. The first two books look in more depth at this world and what happens to those children who are born illegally. The are awesome - if you haven't had a chance to read them do so.

This book starts off with the revelation that the drugs that have been produced to grant eternal life are no longer working and deals with the fallout as more and more people die. The whole incident is blamed on the underground contaminating drugs when in fact the drugs themselves have stopped working as they have been copied time and time again from an original sample.

I don't want to go into much detail as it will spoil the first two books in the series as well as this one but I wanted to put a brief review on to say that this book ties up the entire series excellently.  I loved the political background of the story and love the underground and how they fight back in a society where they are villianised. I didn't see the twists coming at all and was very very satisfied with the ending. The best thing about this series is that it is quite realistic and you could almost imagine it happening, especially the ideas that the world is overcrowded and all the natural resources such as food and petrol have run out.

A fab series which doesn't receive the recognition it should - if you haven't read it do so (especially if you like your dystopian fiction). A real gem!

I am probably going to reread the entire series and then edit this review once I've read them all back to back as it has been a while since I've read book 1 and 2.

Tara said…
Wow this sounds like a great series!

Aleksandra said…
Sounds great! I'm adding the series on my reading list! Thanks for the recommendation :)
17 September 2010 at 13:21

Rebecca-Books said…
I've only recently read the other two books and I seriously need to read this one to find out what happens.
I love this series. It's just...so different and original. :)
5 December 2010 at 09:57