September 27, 2010
Annexed by Sharon Dogar
Published on Oct 2010 (according to goodreads - I picked mine up in Foyles before that!) 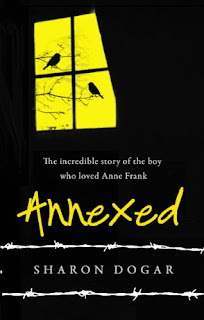 Everyone knows about Anne Frank and her life hidden in the secret annex – but what about the boy who was also trapped there with her?

In this powerful and gripping novel, Sharon Dogar explores what this might have been like from Peter’s point of view.  What was it like to be forced into hiding with Anne Frank, first to hate her and then to find yourself falling in love with her?   Especially with your parents and her parents all watching almost everything you do together.   To know you’re being written about in Anne’s diary, day after day?   What’s it like to start questioning your religion, wondering why simply being Jewish inspires such hatred and persecution?  Or to just sit and wait and watch while others die, and wish you were fighting.

As Peter and Anne become closer and closer in their confined quarters, how can they make sense of what they see happening around them?

Anne’s diary ends on August 4, 1944, but Peter’s story takes us on, beyond their betrayal and into the Nazi death camps.  He details with accuracy, clarity and compassion the reality of day to day survival in Auschwitz – and ultimately the horrific fates of the Annex’s occupants.

The story is based on Anne Frank's diary losing at the life of those in hiding from a male perspective as Peter the boy who hid with her. I actually think it would be more accesible in some ways than Anne Franks diary for some (especially boys) and it is a brilliant companion to it despite it being a work of fiction as it is so well researched and put together to fit alongside Anne Frank's Diary. I enjoyed the story throughout and was consistently impressed with how well it was researched and tied in. I loved the fact that Peter, Anne and their respective families are seen as they were, ordinary people living in extraordinary times and the fact that they weren't anything special just shows how special they were and how horrific the crimes of the Nazis were against them. It reallt hits home that such a things could happen anywhere to anyone and without people standing up to prejudice and discrimination such a tragedy could happen again.

Michelle Fluttering Butterflies said…
I wasn't sure about this book either, something about it felt wrong. But I might read it and that might change my opinion of it?
27 September 2010 at 10:07