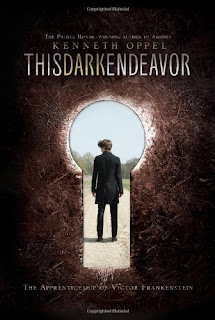 Victor and Konrad are the twin brothers Frankenstein. They are nearly inseparable. Growing up, their lives are filled with imaginary adventures...until the day their adventures turn all too real.

They stumble upon The Dark Library, and secret books of alchemy and ancient remedies are discovered. Father forbids that they ever enter the room again, but this only piques Victor's curiosity more. When Konrad falls gravely ill, Victor is not satisfied with the various doctors his parents have called in to help. He is drawn back to The Dark Library where he uncovers an ancient formula for the Elixir of Life. With their friend Elizabeth, Henry and Victor immediately set out to find assistance from a man who was once known for his alchemical works to help create the formula.

Determination and the unthinkable outcome of losing his brother spur Victor on in the quest for the three ingredients that will save Konrad's life. After scaling the highest trees in the Strumwald, diving into the deepest lake caves, and sacrificing one’s own body part, the three fearless friends risk their lives to save another.


***
This Dark Endeavour was a dark and creepy read which royally freaked me out and got me under the skin of a well known character giving new insight into how they transformed into the character we all know so well.

The main storyline of this book follows a young Frankenstein as he quests along with some friends to find the ingredients for the elixir of life which he needs to save his twin brother. The thing this book does well is it builds up the suspense as the story goes through and gets you so hooked on a scene as Victor goes about all the things he needs to do to find the ingredients he needs. The scenes are claustrophobic and harrowing and downright creepy.

It was interesting to see the relationship between Victor and his brother which was built both on love but also jealously. The way in which he pursues the young girl whom his brother loves and wrangles with himself about why she has picked his brother rather than him give you a lot of insight into the type of person he is at his core.

I found the dark library really fascinating. The twins stumble upon it while planning and it is here where he finds the books which led him to research and find out more about alchemy. I love the references to Paracelsus (being the history geek that I am) and how Victor becomes set on following his work to find a way to cure his brother.

There are countless scenes in this book which made me squirm as a reader often getting to the point where had the story been a film I would have been watching from behind my cushion.

Definitely the book for you if you like horror but maybe not for the faint hearted. You have been warned.