The declaration series by Gemma Malley

December 20, 2011
I wanted to do a bit of a showcase of books I read before I started blogging and loved but will probably never have the time to reread anytime soon so on the odd occasion one of these posts pop up ... 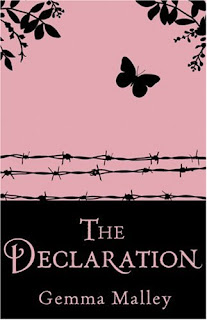 I read the declaration by Gemma Malley and loved it. For me it does everything a good dystopian book should do (this was even before I knew such a thing as dystopian existed). Anna is a surplus. She lives in a world where no one dies but as a pay off no one is allowed to have children. Anna's parents however were selfish and did so anyway and had to be punished for doing so. As a consequence Anna has spent her life in an orphanage like institution treated by the staff like she is the lowest of the low. It isn't until one night that Anna finds out everything isn't quite like it seems and her whole world is turned upside down.

The thing I loved about this book was that it actually could, in the not so distant future, happen. It makes a good comment on our health care system, on the role of big corporations and government intervention into the daily lives of citizens.

The book itself was also brilliant because it read like an awesome stand alone but actually then sparked off two more books which I enjoyed just as much.

A brilliant series which I would highly recommend.