August 02, 2018
Over the past six weeks I've been ridiculously busy with work and not had a chance to review much so this is my attempt to catch up and share with you the books I've read for review and loved. 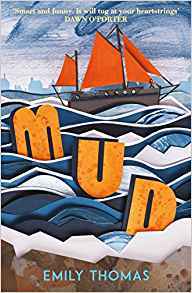 It's 1979, and thirteen-year-old Lydia has no idea how she'll cope when her dad announces that the family has to sell up and move onto a Thames sailing barge in Essex. With his girlfriend. And her three kids. Between trying to keep her clothes dry in a leaky cabin, disastrous hair-dye attempts, awkward encounters with local boys, and coping with her suddenly enormous and troublesome family, Lydia fears she'll sink rather than swim . . . At turns heartbreaking and uplifting, through Lydia's innocent and perceptive voice we find out that while the mud may stick, the tide can turn - and in unexpected and joyful ways.

I really enjoyed this book. It felt like a cross between Adrian Mole and Georgia Nicholson set in the 80s and told via a diary. The life Lydia is forced to lead is bonkers and fascinating yet underneath it all is some really heartfelt stuff about family and the impact they can have on your life for better or worse. 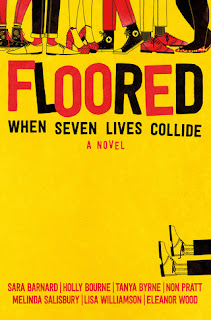 I was very excited for this novel and it did not disappoint. I enjoyed all the characters and seeing where their story went and trying to work out who wrote who. If I had one complaint it'd be that it wasn't long enough because the story had to split across seven threads. I'd gladly read more from the characters and their world. 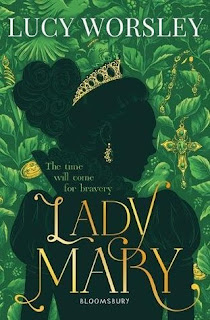 By turns thrilling, dramatic and touching, this is the story of Henry the Eighth and Catherine of Aragon's divorce as you've never heard it before - from the eyes of their daughter, Princess Mary.

More than anything Mary just wants her family to stay together; for her mother and her father - and for her - to all be in the same place at once. But when her father announces that his marriage to her mother was void and by turns that Mary doesn't really count as his child, she realises things will never be as she hoped.

Things only get worse when her father marries again. Separated from her mother and forced to work as a servant for her new sister, Mary must dig deep to find the strength to stand up against those who wish to bring her down. Despite what anyone says, she will always be a princess. She has the blood of a princess and she is ready to fight for what is rightfully hers.

I enjoy excellent historical fiction and this certainly was just that. I really liked the insight into Mary I before she became Queen and seeing her view point on the politics surrounding Henry VIII as it happened.

A secret beat by Rebecca Denton 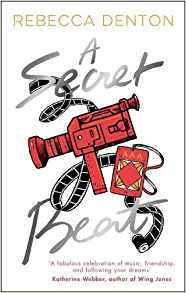 You've got one shot... Alexia Falls is eighteen, living in her parents' New York penthouse and working with superstar boyband The Keep. But with her heart set on independence and a career behind the camera, she trades it all for a take-it-or-leave-it internship at London's Bright Star Productions. There, she meets fellow intern Greta. Greta's East End upbringing couldn't have been more different from Alexia's, but she's every bit as hungry for her big break. But both girls have secrets. While Alexia doesn't want anyone knowing about her privileged connection to The Keep, Greta has been anonymously running their #1 social fan-feed since she was at school. And when the gossip columns somehow get news of the band's latest scandals, suspicions and accusations start flying... Real art demands integrity. But staying in the music business requires the opposite. Can you stay true to yourself when your heart follows a secret beat

I thoroughly enjoyed this book. It's more a companion novel than a sequel and can totally be read as a stand alone. I loved seeing the music industry from two very different view points and loved following the story through with the characters.

I was born for this by Alice Oseman 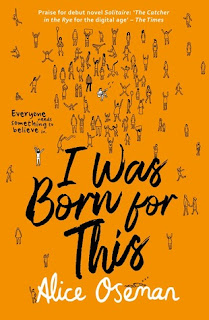 For Angel Rahimi, life is only about one thing: The Ark – a pop-rock trio of teenage boys who are currently taking the world by storm. Being part of The Ark’s fandom has given her everything – her friendships, her dreams, her place in the world. Jimmy Kaga-Ricci owes everything to The Ark too. He’s their frontman – and playing in a band is all he’s ever dreamed of doing. It’s just a shame that recently everything in his life seems to have turned into a bit of a nightmare. Because that’s the problem with dreaming – eventually, inevitably, real life arrives with a wake-up call. And when Angel and Jimmy are unexpectedly thrust together, they will discover just how strange and surprising facing up to reality can be.

Boy band books are my catnip. I can't get enough. I loved this because it was so thoughtful. It gave that real insight into the mad world that being a celebrity must be but also had thoughtful things to say about mental health and friendship. I also loved how diverse the characters were.

We are young by Cat Clarke 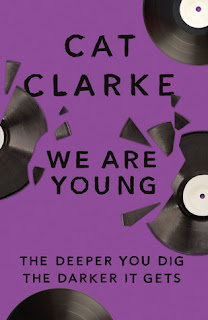 On the same night Evan's mother marries local radio DJ 'Breakfast Tim', Evan's brand-new step-brother Lewis is found unconscious and terribly injured, the only survivor of a horrific car crash. A media furore erupts, with the finger of blame pointed firmly at stoner, loner Lewis. Everyone else seems to think the crash was drugs-related, but Evan isn't buying it. With the help of her journalist father, Harry, she decides to find out what really happened that night. As Evan delves deeper into the lives of the three teenagers who died in the crash, she uncovers some disturbing truths and a secret that threatens to tear her family - and the community - apart for ever...

I also love a Cat Clarke book and this was no exception. It was clever and thoughtful and didn't hold back YA like it should be done.