August 31, 2018
I've read lots of awesome YA fiction for review over my summer holidays. These are the ones I loved.

You only live once by Jess Vallance 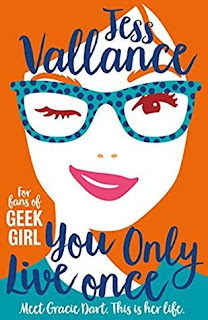 The start of a hilarious new teen series for fans of Geek Girl.

Gracie Dart has always worked hard and she's got a wall covered with revision timetables and French verbs to prove it. But now GCSEs are behind her and she suddenly starts to think: what was the POINT of it all?

When Gracie thinks she's dying of a disgusting tropical illness, she starts to worry she's been wasting her best years being sensible. It's like people say: you only live once - so isn't it about time she started LIVING?
(OK, so the tropical illness turned out to be a fake-tan miscalculation. Anyone could make the same mistake.)

When Gracie decides to do something, she does it properly. Gracie Dart is about to live out her dreams. However embarrassing.

I enjoyed this book because it was funny and sweet. The main character has just finished school and it determined to try new things and live her life the way she wants now it isn't being taken over by exams and studying. I enjoyed following the ups and downs of her adventures over the summer. Fourteen-year-old Stevie lives in Lewes with her beloved vinyl collection, her mum ... and her mum's depression. When Stevie's mum's disability benefits are cut, Stevie and her mother are plunged into a life of poverty. But irrepressible Stevie is determined not to be beaten and she takes inspiration from the lyrics of her father's 1980s record collection and dreams of a life as a musician. Then she meets Hafiz, a talented footballer and a Syrian refugee. Hafiz's parents gave their life savings to buy Hafiz a safe passage to Europe; his journey has been anything but easy. Then he meets Stevie... As Stevie and Hafiz's friendship grows, they encourage each other to believe in themselves and follow their dreams.

As always with a book from Siobhan this book was heartfelt and just lovely. It had a lot to say about the impact of poverty on families in Britain and about the current refugee crisis. The story was interesting throughout and I loved seeing the friendship between the two main characters grow. 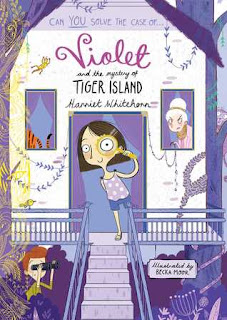 Join Violet Remy-Robinson, an amateur Sherlock Holmes in the making, on her fifth adventure…

Violet and her friends can’t believe their luck when they’re invited to a wedding on a tropical island. But when old enemies the Du Plicitouses show up at the same hotel, and a valuable figurine goes missing, Violet is sure the sneaky family are behind it. It’s a race against time — and a hungry tiger — to uncover the truth and make sure the big day goes to plan.

I have enjoyed this series from the start and I was so pleased when this arrived for me to review. It is just as brilliant as the previous books in the series and a wonderful end to the series featuring many characters from across the different books. The mystery was satisfying and I didn't want it to end. 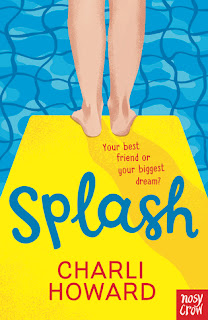 Molly is in her final year of primary school, with secret dreams of becoming an Olympic swimmer. Having always lived in the shadow of her manipulative friend, Chloe, Molly finally has the chance to compete in a regional swimming contest and define herself on her own terms. But with the pressure of fitting in, and the sudden arrival of her mysterious mum, will she give up on her dreams for a shot at popularity? A hugely exciting debut with a classic underdog story, a wonderfully relatable protagonist, and an important message of friendship, body positivity, and celebrating who you are.

This was such a sweet read and really thoughtful. It had a lot to say about body image and issues around bullying. I loved how the main character grew over the course of the book and found herself as her confidence grew. Really lovely read for young teens.

Peril in Paris by Katherine Woodfine 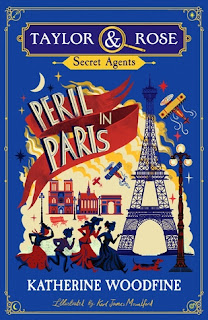 ALL ABOARD THE TRAIN TO PARIS!

It’s 1911, and the young detectives of TAYLOR & ROSE are turning their talents to ESPIONAGE.

On a case for the mysterious SECRET SERVICE BUREAU, the daring MISS SOPHIE TAYLOR and MISS LILIAN ROSE must leave London for the boulevards and grand hotels of Paris.

But DANGER lurks beneath the bright lights of the city - and INTRIGUE and MURDER lie in store. As aeroplanes soar in the skies overhead, our heroines will need to put all their spy skills to the test to face the PERIL that awaits them...

I thoroughly enjoyed it. Loved being back in the world of Sophie and Lil. I got particularly geeky about the prewar europe setting because I am a history geek. 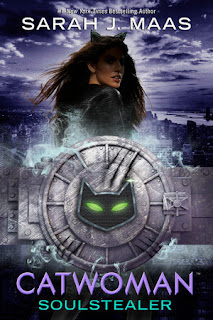 When the Bat's away, the Cat will play. It's time to see how many lives this cat really has. . . .

Two years after escaping Gotham City's slums, Selina Kyle returns as the mysterious and wealthy Holly Vanderhees. She quickly discovers that with Batman off on a vital mission, Batwing is left to hold back the tide of notorious criminals. Gotham City is ripe for the taking.

Meanwhile, Luke Fox wants to prove he has what it takes to help people in his role as Batwing. He targets a new thief on the prowl who seems cleverer than most. She has teamed up with Poison Ivy and Harley Quinn, and together they are wreaking havoc. This Catwoman may be Batwing's undoing.


Another cracking novel in the DC Icons series. I loved this version of Catwoman and seeing how her story fit in with the rest of the series and the wider DC universe. I enjoyed seeing how diverse it was and how awesome the representation was of strong young woman through the main character. I can't wait for the next one in the series. 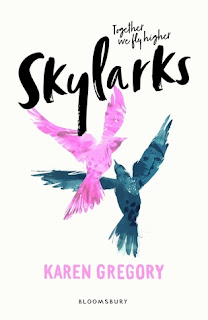 We watch the bird as it flies high above us, singing like it's the only thing in the world that matters.
And I feel it - that life can be beautiful. That there are possibilities.

Keep your head down and don't borrow trouble is the motto Joni lives by, and so far it's seen her family through some tough times. It's not as if she has the power to change anything important anyway. Like Dad's bad back, or the threat of losing their house.

So when Annabel breezes into her life, Joni's sure they're destined to clash. Pretty, poised, privileged - the daughter of the richest family in town must have it easy.

But sometimes you find a matching spirit where you least expect it. Sometimes love can defy difference. And sometimes life asks you to be bigger and braver …

This was really such a thought provoking book. Featuring a really sweet lesbian relationship it also had so much to say about how money defines us even though it shouldn't. In particular the gulf between the rich and poor particularly those working class families who work really hard but are stuck in a situation they struggle to get out of because of the rising cost of living. I really enjoyed it. 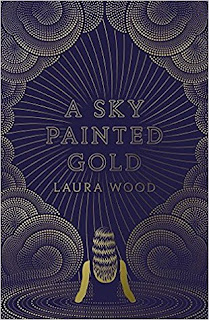 Growing up in her sleepy Cornish village dreaming of being a writer, sixteen-year-old Lou has always wondered about the grand Cardew house which has stood empty for years. And when the owners arrive for the summer - a handsome, dashing brother and sister - Lou is quite swept off her feet and into a world of moonlit cocktail parties and glamour beyond her wildest dreams.

But, as she grows closer to the Cardews, is she abandoning her own ambitions... And is there something darker lurking at the heart of the Cardew family?

I don't know quite what was expecting when I picked up this book but I am glad I did. It was really wonderful romantic novel set in the 1920s in Cornwall. I loved being in that world and seeing the glamour of the rich the priviledged through the eyes of the main character who had been invited in. I loved the romance and I loved following the story through. Just a gorgeous summer read.

The Children of Castle Rock by Natasha Farrant When Alice's family home has to be sold, she and her father Barney will do whatever it takes to buy it back - even if whatever it takes isn't strictly legal. And when Alice is expelled and sent away to an isolated boarding-school, she'll do whatever it takes again to get away. But Stormy Loch Academy isn't quite what she expected. With its strange rules and eccentric headmaster and rag-tag mix of students and teachers, it has a way of growing on you. Still, when Barney goes missing (all that not strictly legal business) she knows she has to rescue him. Armed with two new friends, she sets off on an epic quest through the wild Scottish highlands and islands to finally get her heart's desire - but does she know anymore exactly what that is?