One Fine Day in Hay
by Hayley Long

I love the Hay Literary Festival.  I actually love it to bits.  To be honest, I love ALL literary festivals because - like you - I’m just a tiny bit obsessed with books.  But Hay has a special place in my heart simply because it happens to be in Wales.  And anyone who knows anything much about me at all will already know that Wales is my glad and happy place.

So you can imagine how chuffed I was when I got an invite asking for my availability for Hay 2016.

Quickly, I fired an email back.  ‘I’m ALWAYS available for the Hay festival,’ I said.  And then I crossed my fingers and hoped for an invite.
On this occasion, the finger-yoga worked, and several weeks later I was driving east to west, leaving the rain behind me and entering a world of magnificent hills and bright sunshine.

I’d decided to pass on the opportunity to stay in a guestroom somewhere and was staying, instead, in the town of Monmouth with my friend Lynda.  We’ve known each other since Freshers’ Week at Aberystwyth University way back in 1789.  This is us as we once were, complete with our eighteenth century hair: 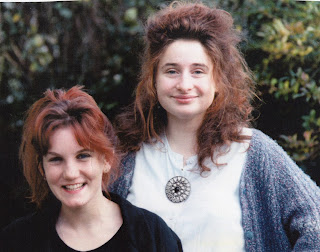 It’s always lovely to see Lynda, and it was with her and a couple more Monmouth chums – Garry and Amanda - that I drove early on a Friday morning over the Black Mountains to Hay.  The weather was wonderful, the scenery was beautiful and The Smiths were playing on the stereo so we could all wail along.  THIS is how to arrive at a book event.  Usually, I’m alone on a train with a bag of beef crisps.  This was better.
After we’d parked up, we headed first for the bookshop and checked out the signed copies.  I bought a copy of Elvis has Left the Building by Dylan Jones for my husband and then I lurked around my own bookshelf just long enough for Garry to take this photo: 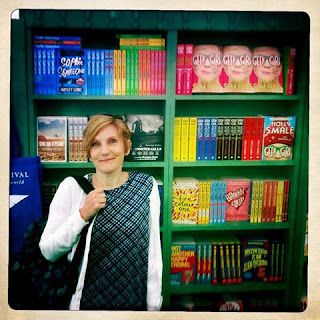 My shelf is the one directly above my head.

After that we all went and had a drink.  Or rather, my friends did – I just sat and sweated.  I’d started feeling that jingle-jangle of nerves.  Looking at my watch, I saw that it was time to leave my friends and get to business and so – with a slowly spinning stomach – I headed for the Green Room.  Once inside, one of the first people I saw was Jenny Valentine who was appearing with me on a panel called Family Secrets.  I’d met Jenny the previous summer at the Edinburgh Festival so the sight of a familiar face calmed my nerves a little.  Then I spotted some other people frantically waving at me and went to investigate.  They were a very friendly bunch of literary agents from Peters Fraser and Dunlop who recognised me from my photograph.  I sat outside with them in the sunshine and my nerves calmed a little more.  Very soon after, I met Annabel Pitcher - also appearing on the Family Secrets panel - and Daniel Hahn who would be chairing the discussion.  They were both lovely.  My disco- stomach slowed to a stop.

When it was time for us to go, we were led to the Oxfam Moot stage where we were to appear.  It was a big venue and, with the sun still beating down outside, it was warm.  Very warm.  My insides began to rotate again.  I don’t know why my nerves jangle and my stomach turns into a tumble dryer before every single event that I do, but that’s what always happens.  I’ve learned to accept this inconvenience and just to spin with it.  As far as this affliction is concerned, I’m in good company.  As I was having my microphone attached to me, I was cheerily told that Benedict Cumberbatch had been at Hay a few days before and he had confessed to being very nervous too!

We took our seats on the stage and watched as the venue began to fill up.  I spotted Lynda, Garry and Amanda and waved.  The lights came on and Daniel Hahn began introducing us.  I sat very still.  With folded arms.  With unfolded arms.  With hands together. With hands gripping the side of my seat to stop myself from sliding right off it.   My face muscles wondered what the heck to do.  My stomach – like Elvis - left the building.  This is a picture of me clinging on to my own knee: 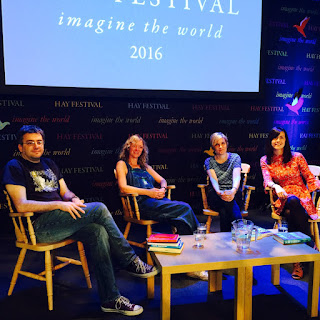 But then Daniel directed a question at me and I put my brain into gear and started talking.  About writing and about ideas and about watching Homes under the Hammer when I haven’t got any ideas.  All my nerves completely disappeared.  Everything felt normal.  In fact it felt better than normal because chatting to Jenny and Annabel and Daniel was really fun and interesting.  And when Daniel was done with his questions, the audience asked theirs, and I got the chance to tell the world – again – how much I love Louis Sachar’s book, Holes.

All too soon, the venue emptied and we trooped off to the bookshop to sign books and chat to the people who would read them.  My nerves were nowhere on the planet and, when I re-joined my friends, it was with a great big smile on my face.

I LOVE book festivals.  And school visits and library visits.  In fact, I love ALL the jingly-jangly nervy happy days like these. 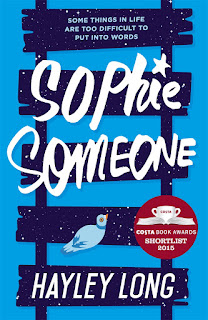