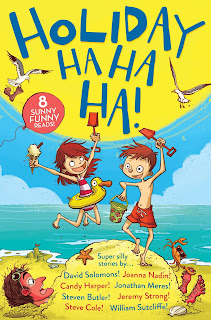 Jamie Littler
When I was a teenager I was lucky enough to go to Florida with my family for our summer holiday. Needless to say, we were having a jolly old time, holidaying here, vacationing there. All of that fun can be hungry work, and as we were in the big US of A, we thought it would be great to go to one of those American all-you-can-eat diners. We'd had a lovely meal (please don't stop reading, I will get to the point, I promise!), we were all stuffed, and it was clearly time for dessert (there's always room for ice cream, after all...).

Before we continue, I must mention one thing, and that thing is my younger brother. He's...well, he can be a bit...mischievous from time to time. He'd already been told off for being hugely inspired by the Pirates of the Caribbean ride in Disney World and trying to make my younger sister walk the plank off of a kayak she was in later on in the Florida Keys. Of course, the kayak had no plank, it was mostly just my brother pushing my sister into a jellyfish-infested lagoon. Why, at that very dinner, my brother had already called me over to the dessert area and made me cry with laughter showing me how the ice cream that squirted out of the machine looked astonishingly like poo. It was true, it did! Our laughter was getting us a lot of disgruntled looks from the others trying to enjoy their meals in the restaurant, and not wanting to be those guys, we tried our best to simmer down the frivolity.

My brother went back to the poo machine for seconds, and was gone for quite a while. We couldn't see him, as our table was in another section of the restaurant. You could see the worry creep into parent's eyes. Where is he? Why has he been gone for so long? What is he up to? Time passed, and my brother came rushing back, looking quite dishevelled. 'Quick! Hand me the serviettes!' he cried, 'pass me some tissues!'

'What have you DONE?!' my dad asked angrily.

'It wasn't my fault!' (A classic younger brother line). It turns out, on the way back from the ice-poo-machine, my brother had trodden on one of those little milk-pod thingies, y'know, the small things you get at motorway service stations, where you peel back the lid and there's a small amount of milk inside? Yeah, those things. He'd trodden on one that happened to be on the floor and the whole thing had exploded over this poor American woman's nice coat. My brother was desperately trying to wipe off the dripping milk, and my dad came over to apologise to the lady, furious at my brother. 'I'm so sorry,' he said to the angry woman. 'I'm so, so sorry about this. I don't know what my son was thinking. He'll clean it up for you! And I – I…' my dad began to stutter, looking down at the floor. 'I… I appear to have done the same thing...'

And he had! Dad had gone and trodden on another of those milk pods, and the milk had once again exploded all over the lady's coat. The woman, who had begun to look a bit less angry, looked full-on livid now. Was this some kind of bad joke? 'I'm sorry,' was all my dad could say. 'We're English.'

To this day, I still don't know why there were so many milk pods on the floor of that restaurant.

Jamie Littler graduated from the Arts Institute at Bournemouth in 2008 and won a High Commendation in the Macmillan Children’s Book Award. He is the creator, writer and illustrator of the comic series Cogg and Sprokit which was serialized in the Phoenix Comic. He’s illustrated many children’s books including Hamish and the WorldStoppers and Hamish and the NeverPeople, and is the cover illustrator for Holiday Ha Ha Ha!

From amazing aliens and strange superheroes to fantastic forests and crazy creatures; from ghoulish ghost tours and tiresome traffic jams to super spies and terrible talent shows – you’ll be laughing all summer with these eight summer sillies!