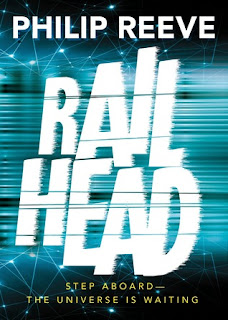 G is for Guardians

There is a garden where the gods meet.
It is not a real garden.  Everything here, from the topiary yew hedges to the snow which drifts down from the dark grey sky to cover the lawns, is made of code. But that does not matter, because the gods are not real gods. They are ancient AIs, computer intelligences which live as tides of information in the Datasea. It amuses them to think of themselves as gods, and to treat human beings as the gods once did, in tales from Old Earth. And it amuses them to meet here, in this virtual garden, when they need to discuss the wayward ways of humans.

The Guardians arrived early when I started writing Railhead. How had human beings come by this incredible hyperspace railway? I had no idea how it worked, so I decided that maybe nobody in the book knows how it works, either - it’s based on maths which is beyond human abilities, and must be the work of all-powerful Artificial Intelligences. But all-powerful Artificial Intelligences are best kept off-stage, I think, so they remain a background presence throughout most of Railhead. (This bit of text is from my notebooks, it didn’t make it into the finished story.)

There are twelve of them. Each has a million copies, versions of themselves running in the data rafts of every inhabited world in human space, and on uninhabited worlds, too, downloaded into the minds of probes and research stations. Somewhere, other facets of themselves are plummeting into the mantles of suns, or riding the fearsome weather systems of gas giants, or drifting in the void between the stars. But when you get right down to it, there are twelve, the same twelve intelligences brought into being by human scientists on Old Earth in the brief period between the invention of Artificial Intelligence and the moment when the Artificial Intelligences became wiser than their creators, started calling themselves the Guardians, and decreed that no more intelligences like them should ever be made. (Like the gods in those old stories, they are jealous. They do not want to share the universe with too many others like themselves.)
The Guardians are useful, too, from a ‘world-building’ point of view. Left to our own devices, I think human beings will evolve all sorts of new social structures, so that a hi-tech society of a few centuries hence will be nothing like our own. But a society that’s nothing like our own isn’t all that interesting to read about: I needed plenty of points of similarity, so the Network Empire is still organised in ways that are familiar to a 20th Century boy like me. How can this be? Well, don’t blame me; it’s the Guardians who have arranged it that way. And why? Who knows? They have whims and motives which mere humans can’t even guess at.

Some of the Guardians appear in the garden looking the same as they looked in the days when they cloned bodies for themselves and walked in human worlds. Anais Six is a tall blue person, vaguely female, antlered. Mordaunt 60 is a golden man. Others have created more imaginative avatars for themselves - the Twins have arrived as shimmering school of rainbow-coloured fish which dart along the paths between the yew hedges as if they are swimming through water, not air (they are swimming through neither, of course; they are just code, swimming in more code). Out on the white lawns the peacock avatar of Shiguri minces to and fro, stopping now and then to spread the fan of its tail and turn a hundred watchful eyes upon the others.  Something small and busy rustles through the heart of the hedges like a supersonic field mouse, scattering snow and dead leaves and making the topiary figures tremble - the avatar of shy, eccentric Vohu Mana.*