June 30, 2015
June's reading has been awesome in some respects. I spent the first couple of weeks getting through loads but had to stop when my exam board marking started in the middle of the month. Hopefully I'll make up for it when the summer holidays get here.

It has to be Unbecoming by Jenny Downham. You are all in for a special treat when it is released. 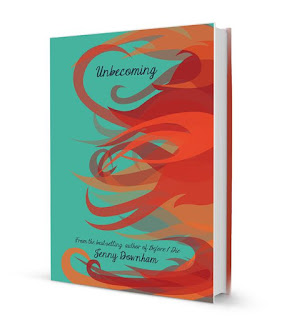 I have been to two lovely events this month.

Firstly I went to the launch for Being a Girl by Hayley Long at Norwich Waterstones. It was a brilliant event. I spent too much because I had free reign of a bookshop for a few hours.

I also went to an event at Bloomsbury with authors Jenny McLachlan and Sarah Crossan which was just awesome. I loved meeting both the authors and hearing more about their work.

On the blog
I've reviewed a far few books this month on the blog.
The Mystery of the Clockwork Sparrow by Katherine Woodfine
Being a girl by Hayley Long
Saint Anything by Sarah Dessen
It's about Love by Steve Camden
The Crowham Martyrs by Jane McLoughlin
Remix by Non Pratt
My secret rockstar boyfriend by Eleanor Wood
Air by Lisa Glass
In another life by Laura Jarratt
Finding Audrey by Sophie Kinsella