We are all made of Molecules by Susin Nielsen 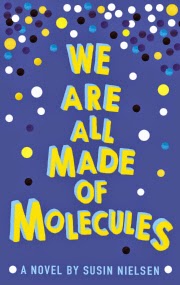 Meet Stewart. He’s geeky, gifted and sees things a bit differently to most people. His mum has died and he misses her all the more now he and Dad have moved in with Ashley and her mum.

Meet Ashley. She’s popular, cool and sees things very differently to her new family. Her dad has come out and moved out – but not far enough. And now she has to live with a freakazoid step-brother.

Stewart can’t quite fit in at his new school, and Ashley can’t quite get used to her totally awkward home, which is now filled with some rather questionable decor. And things are about to get a whole lot more mixed up when these two very different people attract the attention of school hunk Jared. . .

This book was recommended to me by Phil Earle and as per usual he was right and I adored it.

The book is split between two narrators. Very popular Ashley and very geeky Stewart whose worlds collide when their parents get together. Seeing their differing reactions to the change in their life is brilliant and I loved seeing the contrast between Stewart's scientific and logical brain and Ashley's illogical drama queen one.

For me the story was full of heart and I loved the message it had. The story surrounding Ashley's recently out gay father was really touching and thoughtful and the way in which the bullying of Stewart by Ashley's not nice boyfriend was resolved by the end of the book was incredibly heartwarming.

All in all a book I adored entirely.