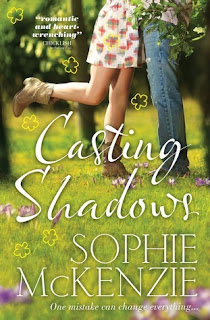 What can we expect in this third part in the series?

The series takes a slightly darker turn in Casting Shadows. Flynn is under pressure to deal with his temper while River is keeping a significant secret from him, even as their lives become more and more entwined.

Do you think River and Flynn have changed during their relationship?

I think River has grown up a lot and become more self-aware. She doesn’t have such a romanticized view of love anymore, she understands that loving each other passionately isn’t enough – making a relationship work requires respect and honesty too. Flynn has learned a lot from River; most importantly, he knows that he needs to get a handle on his temper.

And do you think they have had a positive or negative influence on each other - or maybe both?

I think they’ve had all sorts of influences on each other. Some of them are probably negative, but everything that happens in all the stories gives River and Flynn an opportunity to learn and grow – so in the end it’s all positive!

Do you need to read the books in order, or can they be read as individual novels?

Personally I like to read books that form a series in chronological order, but it’s perfectly possible to read each of the Flynn books as standalone novels too. Any background info you need to understand the story is provided as the action progresses.

Did you map out all four books before you started writing Falling Fast (the first in the series)?

Not at all! I wrote the first book – and most of the second and third books - many years ago and made up everything as I went along. When it came to the fourth book (Defy the Stars, which I’ve just finished writing) I had a rough idea of what would happen but wasn’t certain of the ending until I was about half way through.

How did you come up with the titles for the four books in this series?

I didn’t come up with them! I had totally different titles for the first three books (and no title at all for the fourth). My publishers pointed out quite rightly that none of my choices would really work, so they had a brainstorming session and came up with the four titles we ended up using.

Once this series finishes, would you like to write more novels that focus more on romance than a thriller element?

I’m not sure. I actually like books best that combine the two, so perhaps I’ll just increase the romance elements in my thrillers and introduce a little more action into my romances!