What's up with Jody Barton by Hayley Long

June 06, 2012
What's up with Jody Barton by Hayley Long
Published by Macmillan 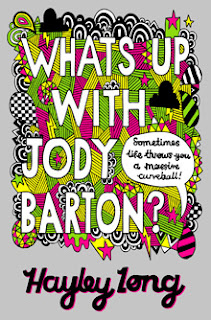 Me and my sister are twins. She's Jolene and I'm Jody. We've both got brown hair, we're both left-handed and we both have these weirdly long little toes which make us look like long-toed mutants. But apart from that, I'd say we're fairly different. Well, actually, we're a lot different . . . It's hard enough being one half of the world's least identical twins, without both of you falling for the same guy. Jolene's turned flirting into a fine art, but Jody? Not so much. And as if a twinny love triangle wasn't messy enough . . . there's something nobody knows about Jody Barton. Something BIG. Told with the trademark warmth and laugh-out-loud humour of the much-loved LOTTIE BIGGS books, this is a book that will make you think, with a gobsmacking twist you won't believe.

What's up with Jody Barton is a fantastic YA contemporary read which I enjoyed thoroughly. It's fun, original and a breath of fresh air in the current UK YA market which has been flooded with paranormal and dystopian fiction.

This review is deliberately short mainly because I don't want to give again thing away or spoil this book for anyone else as I would have been devastated had anyone done that to me. As a warning on that front do not whatever you do flick through this book ahead as you might glean something you don't want to know even without meaning to.

The thing I love about this book the most is Jody's unique voice. Jody is funny and I love Jody's relationship with with Jolene. I love how Jody is a maths geek but also quite cool with it, even without realising it, and I loved following Jody's story. I loved how the story had Jody's doodles added in every so often and how the size of the text was used to convey Jody's emotions and feelings as the story progressed.

I loved the messages this book had. It had brilliant messages about being yourself and not going with the crowd just because you feel like you should. The cyberbullying element in this book is really poignant and also quite powerful for youngsters in seeing how Jody deals with it. I also like the message the book has about family and family values. I loved the Barton family and seeing the relationship between the family unit. I particularly loved their parents and seeing the way in which they treated their twins.

All in all a thoughtful and funny read that I'd highly recommend.